Ooops!  I missed a day.  I'm not sure how that happened but it's now two days after the last date I posted. I've blotted my copybook.  Strange that. I was just talking to a friend on Saturday about writing with pen and ink at school, using inkwells and blotting paper too.  If we needed a new nib for our pen, the damaged old nib had to be produced to show it was really broken.  There would be much surreptitious stabbing of the nib on the wood under the desk to bend the nib.  I find it amusing how such memories float to the surface sometimes.  The blotting paper came in huge sheets and was cut into much smaller sections.  Again the old bit had to be produced to show it was well and truly used up before a new piece was issued. 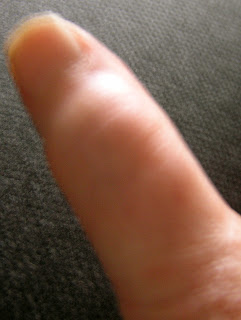 Not many days now till the auction.  I am looking forward to having this over.  I really don't think it will reach as much as I would like but I'll manage.  I just want it finished.  Ex-husband has done a lousy job of the inside of the house, I was disgusted when I saw it.  I doubt he has cleaned the bathroom since I left, not quite three years ago.  I mean that, it was truly disgusting.

I'm still plodding away on the Moda Noir shawl.  Slow going and my thumb has been swollen and sore lately.  As have my feet been.  Yesterday the left foot was quite swollen under my flat instep and it was hard to walk.  I did walk up the road to the other side of the station.  There's a smallish place for sale there and I walked up to have a look at the outside. The photo shows the amount of flex currently in the thumb, in other words next to nothing.  It's blurry as it's very difficult to take a photo of my right hand using my left hand.  The button for the camera is on the right side of the camera and was difficult to operate with my left hand.  Hmmm, I wonder if they make lefthanded cameras for those who need them?  A bit like lefthanded scissors.  I doubt it somehow.  As you can see, there are no lines on the skin where the knuckle should show.  The swelling has obliterated them and I can barely bend it off the vertical.

Ooh, have a look at the site I just found.  A museum in North Ryde, NSW and see about school in teh good old days.  LOL.  The period of time can be chosen in blocks of about twenty years and pupils of today see some of how earlier pupils would have learnt.  Pen sets with blotting paper are for sale and there's a recipe for a jelly pad which I remember seeing used to make copies of drawings.  I'll have a look through more of the site later.  For a school excursion it's not expensive admission, $8/child.
Posted by Jan at 8:23 am

Your poor swollen hand and foot, I hope they subside soon, I can see through the blurriness that your thumb is the thumb of a 20 year old!!
I don't know about left handed cameras?? It is annoying, MrsDrWho is left handed.
I hope the auction goes well, we wil have hands and paws crossed for you.