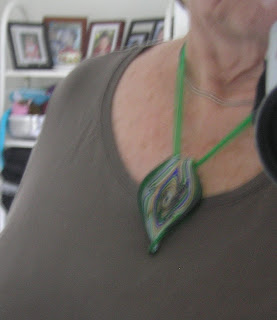 A bad photo of yesterday's impulse purchase of the glass pendant.  It's quite thick and I like the heaviness.  I also like heavy pens and always put the top back on to make them heavier and I also like heavy jewellery and cutlery.  Perhaps I should have waited till this afternoon when there would probably have been more light in my room for a photo.  For such a cheap purchase, it's attracted quite few favourable comments.  There was nothing to indicate the maker or country of origin.

For some time Cindy2paw tested the recipes put out by Coles with Curtis Stone's name endorsing them.  Feed a family of four for  $10" was the advertising for them.  She wrote about them on her blog and I tested quite a few too and agreed with her conclusions.  The servings were small and the flavour bland.  Yesterday's Sydney Morning Herald announced the Shonky Awards by Choice magazine, from the consumer body of the same name.  Guess what?  This promotion earned a Shonky.  Not for the tiny serves, three prawns for example in a serve, nor the bland flavour.  Choice rapped Coles over the knuckles for the $10 claim.  They said that the price was only under that amount if many of the ingredients were already purchased . 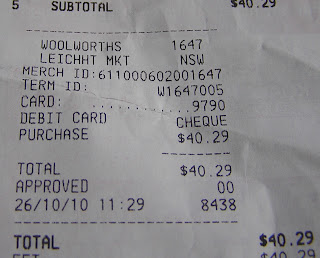 Cindy2paw and Lynne at Yarnivorous were complaining yesterday that Woolworths no longer took debit cards.  I was surprised as I have had no problem at all.  I don't have a credit card but only a debit card.  The photo clearly shows the use of a Mastercard debit card with no extra fee charged, just the purchase amount.  My bank statement has no extra fees charged either.This was for things I bought yesterday.  Now I'm in NSW and they are in two different other states.  Perhaps it does not happen here.
Posted by Jan at 8:56 am

I am glad someone else noted that Coles recipes could not be done for $10 either. My daughter and I went to the supermarket one day to discover that there was no way to buy all the ingredients for that amount which included the meat and vegies even if the herbs were already purchased.

It is a lovely pendant, I agree about heaviness, I think it makes me feel the pen, or pendant, has quality. Ha!! Skonky Coles. Take that!!! One recipe had three lots of herbs, you used three bunches: here that costs $8-97. Not much change from $10.
My credit/debit card is only good for 4 free transactions on Savings a month. If I push the credit button, I use my savings, but the transactions don't attract a fee.

Yes, I can use my debit card as an EFTPOS card at Woollies but I can't use it as a credit card. Instead of being a credit card type payment, it only gives me the option of savings or cheque account. Hope that makes sense!