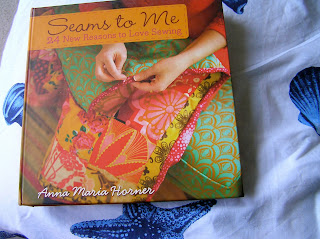 I've been waiting for this book for about ten days.  $25 Australian even before the dollar ht parity with the US dollar.  Her site had it for the same price, autographed, but it would have cost more than that again for postage.  So I went my usual route via the the Book Depository.  besides signing really only adds more than interest value if the book were to be kept in mint condition and never used.

There are two sections, the theory and the practical and an envelope of patterns in the back.

I haven't really looked through it properly, more done a skim read of it.  The first part seems to have some useful information  about machines, sewing , cutting out, seams etc.  To me it's written in a rather twee, schmaltzy tone, but then I'm sensitive to that sort of thing.  Others may find it acceptable.  I can live with it, but it's not my style at all.  Perhaps I've read too many heavy academic tomes! 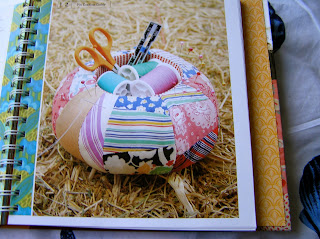 The second section is a group of projects.  There are some interesting fabric boxes, made of 9" cubes with very heavy interlining in them.  She suggests they could be used for yarn storage.  Right! 9"?  Perhaps they would store those pesky small leftover bits of yarn but not much more.  The concept is interesting and could be adopted for smaller boxes.  I doubt bigger ones would be stable.

I don't take part in swaps usually but have seen about pincushion swaps.  This picture shows something I think would work well for such things.  It's called a pincushion caddy. Interesting, I think.
Posted by Jan at 3:03 pm

i haven't ventured into AMH territory yet, figuring she was out of my league at the moment, but maybe not?

Although the idea of twee language, schmaltzy even, does put me off slightly!