christmas is coming and the geese are getting fat 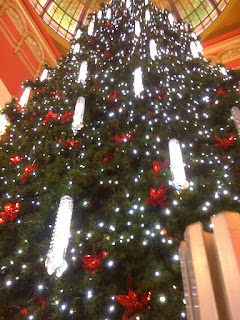 I don't know about the geese but Christmas is coming and the decorations are going up all, over the place.  I was in the city yesterday and walked through the Queen Victoria Building.  Every year they have a huge tree up to the dome in the roof.  The sign near it says it's 24 metres high.  My phone photo shows only a portion of the top part of the  tree.  Not only is is enormous but the sign also says there are over 64,000 lights on it.

The candles on the tree are made of hundreds of Swarovski crystals.  It's fairly understated in the decoration, despite the size.  I don't particularly care whether Christmas trees have a theme from year to year, and are all tizzed up in silver and purple or only ice blue or whatever. I prefer a proper tree rather than something artificial and I prefer traditional ornaments with some  family history behind them.  I'm traditional too in putting up both tree and decorations late in the season for many people.  My mother was not a churchgoer but decorations in our place went up after the season of Advent which is the four Sundays prior to Christmas.  They came down promptly on Twelfth Night or Epiphany, early into January.  By both tradition and inclination, I follow this too.

Dad was a teacher and when I was in primary school the holidays did not start till somewhere around the 19th December.  They seem to have moved back that way for the last few years.  I  enjoyed that.  Not much was done before Christmas and the later breakup meant more time available after Christmas .  We usually went to to the bush near our place and Dad would cut several pieces of casuarina or sheoak from different trees.  These would be artistically arranged  and we would spend an afternoon decorating.

As I walked back through the QVB, I looked in the window for Victoria's Basement.  This is a discount seller of kitchen goods, homewares, knives and lots more.  I was astounded to see boxed coffee mugs from the design I mentioned  which was given to me.  I knew it was an expensive brand of good reputation.  One coffee mug was $70.  I decided against totting up the number of pieces and their value in the 12+ setting I was given with extra bowls and plates.  Obviously it would be $$$$.  I'm just looking forward to using it when I get my own place.

What I did see there were lots of nativity sets.  I've always wanted one.  Ex-husband thought they were akin to superstition.  I've  had trouble finding one I liked and could afford.  I saw one in the Victoria's Basement window, so braved the crowd and went down.  I'll post pictures of it when I put it up in a few weeks.  It's modern, gorgeous colours and different.  It was the last they had like that.  Theoretically it had been $199.  I'm not sure  about that, but some pretty horrible resin caricatures are about $70, so I suppose it's possible.  There was no box for this last one and they weren't getting any more in.  I paid $40 and was happy with my purchase.

A purchase I have NOT been happy with was the membership of the Lush Yarns Luxury Yarn Club.  I paid quite a lot of money for this back in July for delivery over September, October and November.  I joined because I had bought beautiful yarn several times  from them and had always had good service from them.  Shortly after the purchase went through, one of the partners left.  The September yarn came several weeks into October and there was much comment on the Ravelry Lush group.

No October yarn came in October and questions were asked again.  No one could get a reply to messages or emails.  Not a word of reply even to messages left on other web sites she operates.  A few days ago, much of the yarn on the site was drastically reduced.  I suspect a fire sale or possibly worse.  A new yarn club was opened just a few days ago.  I really hope it works for those who may have joined.  Then on Friday, my October and November yarn arrived in one parcel.  It's not been pleasant and has left a nasty taste in the mouths of many of us.  I won't be buying from her again.
Posted by Jan at 11:00 am