socks that rock and blocking 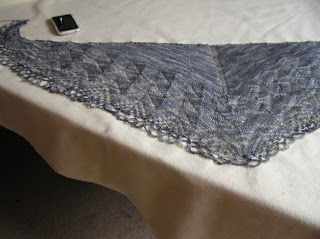 So here's Travelling Woman blocked early this morning.  I think she won't dry out till tomorrow as the sky is very drippy and much the same colour as the shawl.  In fact, it's been raining now for at least two hours.  Very wet rain, thick, although not pelting down.  When I moved the blanket from the table, there was condensation under the blanket.

Do you like my gratuitous phone pic?  Product placement it's called if I were getting any money for it.  It's a hand me down from DIL who upgraded.  I did have my son's old iPhone but it was chipped in the corner.  Hers is fine.  I never thought I'd say this, but I love it.  I use lots of the facilities as they are so much easier to navigate and use than my old phone was.  Old phone was falling apart, so I would have had to do something about a new one anyway. 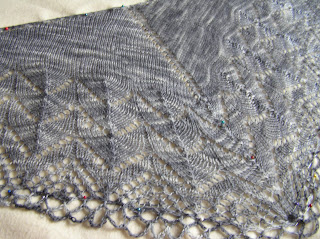 Here's some detail from the shawl.  I had some wool leftover so did a bit of an edge around the triangle.  The Brangian shawl pattern has a chart of amount each successive pattern repeat uses.  If there had been such a thing it would have been good.  I would have known that I probably had enough yarn to do a third repeat of Chart A. 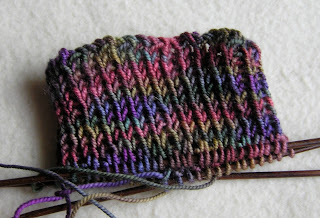 After I finished pinning the shawl out, I wound a skein of the Socks That Rock which I bought from Lynne at Yarnivorous last week.  This is called Muddy Autumn Rainbow.  I like it here and will do just plain stocking stitch socks.  I wound half of it after noting that the skein contained 155 grams.  Broke the wool and would the rest.  That'll teach me!  I should have weighed it before I wound any of it.  I now have a second ball much bigger than the first I wound.  When I weighted the two after seeing this, the total was 178 grams
Posted by Jan at 6:10 am

Your shawl looks beautiful! Love the colors in your socks too!

Yes, the colours in the sock are very pretty, moody but colourful!! Likewise the shawl, very lovely. I didn't even notice the phone, because I didn't recognise it as one!!