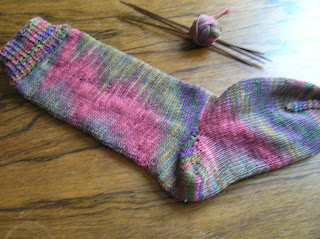 So here's the first of the Socks That Rock pair.  As you can see there's just a little bit of wool left .  This was the first ball I wound from the hank.  I wound off  77 grams as the ball band suggested that there  were 155 grams in the hank. Then I found the second ball was much bigger.  On weighing I found there were 177 grams total in the hank.

I like long legs on my socks.  I find them more comfortable and warmer than shorter legs.  In addition I don't like  a band of bare leg between the bottom of trousers and the top of socks.  So I decided that with the possibility of extra wool on the second ball, I'd make good long legs.  Even after I'd finished the sock, I hadn't touched any of the extra available.  There's just a very small amount left.  Which means there will be about 20 gm left over from the second ball. 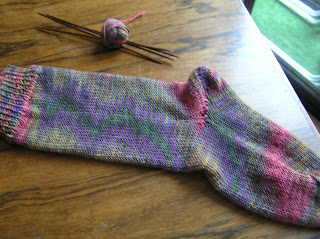 The yarn was pleasant to knit.  Quick too.  Done on 2.75 mm rosewood needles and 56 stitches, they are ample for me.

However, look at the two pictures.  The sock could almost have been done with two separate colours.  Green/purple one side and mostly pink the other.  Now I recognise that colour and stripes are partly a function of the number of stitches, but I'm glad these were muted colours.  I would not have been happy with obvious bright pooling.
Posted by Jan at 6:12 am