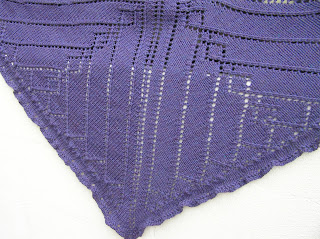 Finished and unpinned after blocking, one Celtic Hearts shawl.  This was the second attempt at this pattern.  The first was ripped out when I lost my way after leaving it for a while.  That was to have been done in Bendigo Melody.  This is their rustic in a colour called Damson.

I don't quite remember just how I messed up the last attempt.  It's not a difficult pattern at all and  the diagonal lines give a sure way of seeing where I am up to in any row.   This is just a shade over 300 gm of the Rustic, knit on 5.5 mm needles and I could probably have used 6 mm. I cast off using a crochet hook and did one chain in between each lot of stitches.  There was no way I was going to undo well over 300 stitches if I decided it was a bit tight. 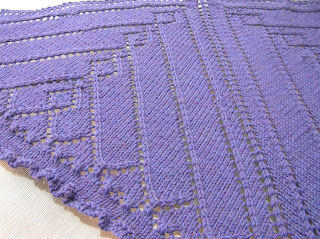 It was hard to photograph as it is very grey today.  The city skyline taken from our third floor balcony outside son's office shows heavy cloud.  There's a cool breeze too.  I know it's Christmas Day tomorrow, but I quite like summer so far.  It's not typical, but every cooler day brings us one more day towards autumn and I did not cope well last year with our many days over 40° C.  Perhaps a little bit more sunshine would be pleasant but I don't care how long it takes to get over 30°.

My son's ankle injury as detailed in previous post below is really quite nasty.  He's seen the orthopaedic surgeon and has a definite date  for surgery of January 20.  He had hoped to get in on a cancellation yesterday but that was not to be.  He says the pain of surgery about equals the current pain and at least it would mean things were on the mend.  There are lots of small bone chips which have to be removed.  One ligament seems to be shredded along its length but it's still in one piece.  Another two ligaments have been totally pulled off their anchorage points on the bone and have quite possibly also lost some of their length.  The surgeon is considering just how to fix this. 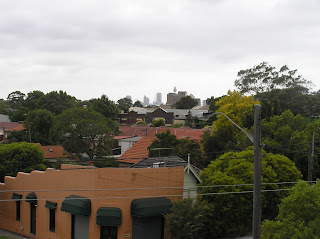 He's having physio on his leg to loosen it up so surgeon can work on the ankle.  Most of the time he sits with his leg up in a bandage for support.  If he  has to move around, he puts on a large plastic boot which has inflatable bladders inside.  These blow up to immobilise the ankle as he moves and also put pressure on the swelling which is still big.  A new pair of elbow crutches is considerably more stable than the hospital crutches he first had.  These were adjusted almost to their limit as he is very tall.  They were very wobbly and looked unsafe.  Lots of bruising too.  It goes from under his toes to well up his leg and will be there for some time. It's very deep.

I wish you all a happy Christmas and a great new year.  I'm thinking of going to the midnight service at the Anglican church just up the road.  However, I may need to get DIL to pick me up afterwards.  It's only a few minutes walk but after midnight in Enmore does not sound inviting.  The footpaths are quite rough in some spots and one person with an ankle injury is more than enough in the house.

I'm looking forward to the new year and a much better one than last year.  In one sense last year was good in that it saw the finalising of several matters.  The process, however, was horrible.  I'm looking around and hope to pick up somewhere to buy soon.  House settlement is the middle of January.
Posted by Jan at 9:56 am

Your shawl looks very pretty. I hope you and your family have a lovely xmas. Wishing your son well with his operation too, it must be so very awkward for him to do certain things with crutches and all that soreness too.

It's a lovely and unusual shawl, and it must have been strange to knit on such big needles when shawls are usually on smaller ones.
I am so happy it has been cool this year. This time last year I was melting. I hope it stays cool for much longer.
Merry Christmas to you and yours. I am sorry to read your son's injury is so painful and that he has to wait. I hope he feels well tomorrow.

The Celtic Hearts Shawl is really lovely, and I love that Damson color...been meaning to pick up some of that. I love Bendigo's Rustic wool...

Hope your son is able to pick up an earlier cancellation date for his surgery. Must be annoying to have to wait around.

Sunny, misty, windy and likely to be hot in the Highlands today...Happy Christmas!

Hope your son is managing the pain OK. That sounds like one heckuva mess in his ankle.

Beautiful shawl Jan! Hope you had a lovely Christmas!
Incidentally, my husband and I actually attend St Luke's - we've been going to the morning service for about 6 months. Maybe we'll bump into each other there?

I like the shawl - the pattern is different and the colour is gorgeous.