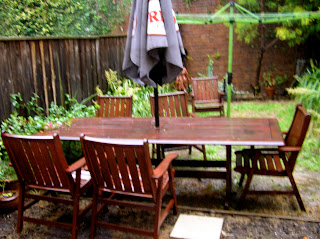 It was a dark and stormy night.  The rain fell heavily.  Wait, let's start again.  It was only 8:15 in the morning but was very dark.  If I had taken this picture as a video, the drops falling and bouncing on the table would have been obvious.  All should be green here with the amount of rain over the last few weeks but my son has plans for landscaping the whole area and some of it has been sprayed with a weedkiller in preparation for that.

I see a cooler summer than usual has been forecast.  I won't be sorry to avoid the 40+° temperatures we've occasionally had over the last couple of years.  However, while fires may not be bad this year with lots of dampness, next year may not be good with the growth from this year providing fuel for a bushfire.

Silly little Sweetpea was shut outside yesterday when it was fine and stayed out when it started to rain.  She was sopping wet when DIL remembered and let her in.  What was annoying was that she could have been under shelter in the little airlock system we have.  She could have come in the open back door and sat by her feed bowl, well out of the rain, if not in the actual house.  Neither she nor DIL was very happy about things.  When I opened the door this morning, she took one look out and ran up the stairs.  She'll just have to use her tray if needed.

So here's the finished

The pattern uses four types of decreases and I also watched that I used the right one.  There were knit 2 together, slip one knit one, pass the slipped stitch over.  Also used was slip one, knit 2 together and psso and the final was slip2 as if to knit together, knit 1 and pass the two slipped stitches over.  The correct one to use at any time was fairly obvious.  These different  decreases are what give the pattern the texture and direction which attracted me to it in the beginning. 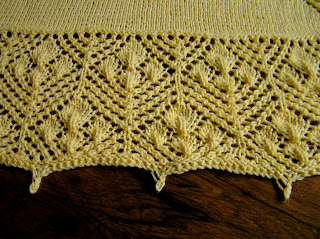 The picot edges were made by casting on several stitches using the backwards loop method and then casting those stitches off.  This is not my favourite method but as it was suggested, I went with it.  You can see from the photo that some of the picots are a bit sloppy with a loose edge from the cast on.  I was reading the latest  Yarn magazine this morning at breakfast and there is an article on various edgings in it.  A similar method is  used  as a picot edge, but the article suggests the cable cast on.  That is what I would have preferred but I went with the directions.  I'll use that method next time.

It's just become darker.  Heavier rain on teh way I think.  I'm supposed to be going out shortly but may not go.  Today's forecast is for "Rain, heavy at times and thunderstorms."  A good day to be inside.
Posted by Jan at 9:17 am

Poor Sweetpea. I hope everyone recovers from the rain soon. We have had our yearly average rainfall already, so any more will be a bonus. I am hoping for a cooler Summer as well. Cooler and wetter.
Your shawl is beautiful, I love the plain shawl and then the gorgeous lovely edging. I can see the picots have a little looseness, I think next time you should go with your inclinations!!

Poor little Sweetpea getting drenched. We have had lots of rain too so I am hoping for a much cooler summer as I do not like the heat very much at all. Your shawl looks simply beautiful, you must be very pleased with it.

I really like the shawl, the mixture plain and lovely lace edging and in 8ply as well - indeed tempting.

I was kinda glad when I realised my DH had taken both sets of keys to my car today and had to cancel my hair appointment and couldn't collect my daughter from school or take her to dancing. Glad to have my day off at home in this weather.

The shawl is beautiful!

BTW, I have been reading every post from late June onwards - it was a rough second half of the year for you. Hope things are much more settled now.