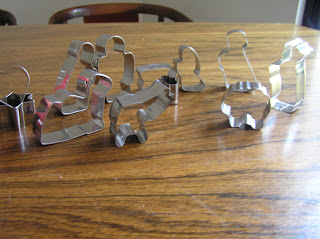 Here's something different today.  After all who wants to look at another 2 cm on a sock.

Not only did  I buy myself a nativity tableau the other week, but I've been searching for biscuit cutters which could be purchased in Australia to save exorbitant US postage and poor delivery times from them.

I found these at Koorong, after following quite a few results from a Google search.  Koorong has branches in many Australian cities which are listed in the sidebar of the page.  These are under GIFTS in catalogue.  I think the postage rate was quoted as $3 for Australia.

If you are interested, I would suggest placing a phone order.  Their ordering system is sort of OK but their registration etc is totally frustrating.  I actually have an account there which is used perhaps once annually.  I put in my email address to log in, but it wouldn't accept my password.  It suggested  going to a page to retrieve password which sent me back to the original page.  Round and round.  So I decided to create a new account with a different email address.  All it would say was that my mail address suggested I already had an account.  Did I want to retrieve password?  And the vicious circle started again.  I tried to change password but it told me nothing matched.  Aaargh!

I was describing the mess to DIL who offered to buy what I wanted as she was going that afternoon to Ikea which in Sydney is near the main branch of Koorong.  My problem was solved, but the system is poor.  I gave her the money and she bought it in person for me.

The detail on the cutters is not well defined, but I suppose it's hard to put too much fine detail on something used as a pattern for biscuit dough.  There are twelve shapes to chose from including the star and the heart.  There's also a biscuit recipe on the container but I think I'll use my own.  There are shapes for  an angel, manger, baby, donkey, camel, Mary, Joseph, shepherd, king, star, heart and lamb.

You can see it mentions a devotional booklet.  I wouldn't call it that at all, so if that bothers you, don't worry about it.  It's a small piece of folded paper listing the characters and animals and giving a Bible verse for each.  Nothing more really.
Posted by Jan at 10:58 am

Isn't it convenient that the ?camel is sitting down, so you don't have to cut out its legs!

Yes, it's a monorail camel, obviously it escaped from Lolcamels!!
We have a shop in town and I am off straight away after I have walked The Labradors tomorrow to see if they have a set. Thank you!!!