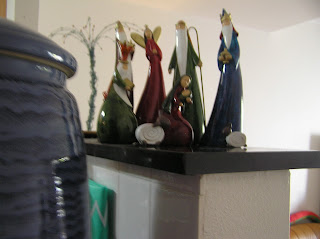 I brought out the set  today which I purchased a couple of weeks ago.  None of the photos taken are really good.  The shelf they are standing on is part of the divider between our kitchen and the lounge area.  Dining room is behind me at the other end of the kitchen.

The problem is that I'm short.  There are three steps down to the lounge.  If I stood on them I was not high enough.  Standing next to preparation bench was not right either.  The barbed wire in the background is part of a  spur on an enormous concrete boot DIL bought at Arts preview night at the Royal Easter Show some years ago.

The figures in this scene are clothed in rich dark colours which is what drew my attention in the first place.  I love the curve of the figures as well.  Something a little bit different to many I could have bought.

I'm glad I bought them.  To me, many of the nativity scenes are sickly sweet.  Some are just plain dreadful, cheap and nasty.  I doubt if the kings saw the baby at this stage.  He would have been a toddler when they arrived, most likely and the number, three is supposed purely because of the number of gifts.

Still, tradition has its place and I intend enjoying my purchase.
Posted by Jan at 3:53 pm

That nativity set is lovely. I'm still looking for one I really love at a price I can bear to pay.

There was a penguin Nativity in town in a shop. These are a little art deco or something, I like the curves. I also know all about being too short!!!
Thank you too, did I say I was able to buy some of those Nativity biscuit cutters you had on your blog? I was very pleased, so thanks for the link!!