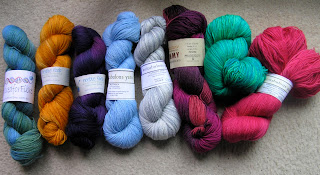 Here's the link (Rav) for the super special, six pattern sock club for 2011.

Members are voting on six patterns each and we will all be knitting the same sock  at the same time.  Socks are to be knit from stash.  There's quite a variety of patterns, although I think the main patterns have been chosen.  There are a few outs allowed and as was said, who's going to police it anyway?  Some have chosen to be associate members as they are not sure of time commitment and some have chosen to allow a wildcard on a pattern or yarn.

I was surprised that I had lots of choice.  I used sock yarn from my room only, nothing actually packed away and there was lots more than this.  All accumulated in the one year we have been here.  It's a year next week.

As you can see , there's lots from Ailsa at Knitabulous.  The gree is Emerald Isle also hers.  Some from Needlefood no longer available and one from Wired for Fibre.
Posted by Jan at 2:56 pm

I saw Bells' sock club post too, it's very exciting and I can't wait to see all your socks!! Nice colours!!!

I just read about SSSPSC2011 today on Bells blog and am still considering "associate". I prefer patterned socks in plain yarns but I have only two balls/hanks/skeins of plain yarn - nearly all my sock yarn is the MV self-striping type from the Big Box Store.