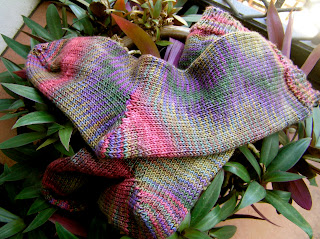 One more pair finished and ready for next winter.  This is the Moody Autumn Rainbow from Socks that Rock.  I bought this yarn from Lynne S at Yarnivorous in a small destash she had.  It was called medium weight.

These were knit on 2.75 mm rosewood needles.  The knitting is very even and I think they look great.  While they've taken me  a while to finish, the actual knitting time was fairly short.  I just had other things to do at the time.  I've even forgotten just when I started them.  56 stitches is ample for me in this weight.  The legs are quite long, not kneehighs , but longer than I often make.  They should be warm next winter, wherever I am then. 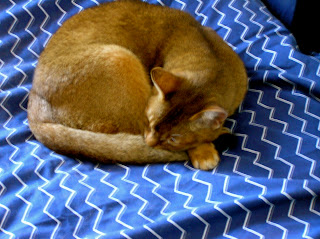 I've given up looking for a while at houses and units.  I am hoping for a bit of a downturn after Christmas in the market.  Lots of money with not much to show for it.  I'm very tempted to move to the Blue Mountains which I love.  I can get a decent house with established garden, near transport, for the price of a single bedroom unit in Sydney.  My sons love it up there too, butI have to recognise they would not be able to visit as often as I would like.  Not only that but the market is very slow.  Some places there have been on sale for months and months.  Well priced, pleasant position, apparently good condition.  If I had to sell, it could take  a while. I have an appointment next week to see a financial adviser from Centrelink.  I've not used this service before, but I know several who have and have been pleased with the advice given.

Sometimes I envy Sweetpea.  She's been like this on one corner of my bed all morning.  Such activity made her hungry and she did come downstairs to demand lunch.  Her colour shows well, but the cover on my bed is a navy blue.  She came back upstairs after she had eaten and is now sleeping off her meal!
Posted by Jan at 3:28 pm

Your knitting is wonderfully even and so regular. Lovely colours too.
Oh Sweetpea, what a life to lead!! She's a gorgeous colour.
It's swings and roundabouts sometimes with real estate. Fingers crossed!!

Rhonda, Lisa and I have got back in touch and Rhonda filled us in with your news.

Would love to catch up properly. Are you on facebook?

Sweetpea looks gorgeous. I had an old Aby and he was able to curl into a little ball so he could have a totally sound sleep, funny old boy.

Pretty socks, they could almost be called "sweet pea" themselves!