trips - not the holiday kind

Quiet around here, I notice.

I spent some time printing out sock recipes patterns for the Super Sock Club 2011.  I've matched them up to the yarn I chose and have packaged each item in bags and packed them away.

DIL and I have been busy with my son.  She's been ferrying him around and waiting in doctors' rooms etc.  Last Monday afternoon, there was a call from the government department where he works at Liverpool.  He had fallen on the stairs and wrecked his ankle and was in Liverpool emergency department.  She headed off to collect him.

Now he's always been an accident looking for a place to happen, but has been really quite sedate for about the last fifteen years.  Five years ago he had an ankle reconstructed to repair damage done as a teenager which was catching up  on him and a bad fall which tore a ligament.  He found that exceedingly painful.  X-rays taken at the hospital weren't conclusive and more detailed ones hadn't been developed.

He had gone downstairs to see some of the operations department guys and has no idea what happened.  The stairs he used don't have much traffic on them and he had to use his phone to get help.  Apparently, the security records from the log of when the door was used and the time the office received his call, suggest he many have been unconscious for a short time.  It's hard to see here, but a larger photo shows they are concrete fire escape type stairs, narrow and awkward. 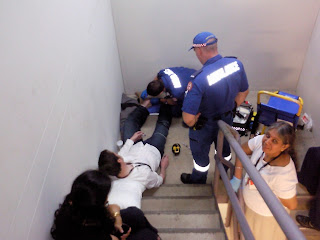 An ambulance was called as he was in extreme pain and couldn't move.  The photo shows a paramedic cutting off his sock after removing his good riding boot.  That needed a dose of morphine for them to accomplish. Then more morphine to cut off the sock.  Two more doses of morphine to remove him from the stairs, you can see another flight to the right.  More to put him on a chair and carry him to the stretcher which could not be brought nearer.  And some more at the hospital later.  I'd show you the picture of him on the ambulance stretcher about to be put in the vehicle, but you can see his face and I don't think he'd like that.  Not even when he wasn't in the state the photo shows. He's quite obviously totally plastered, off his face with all the morphine.  Click on photo to enlarge.

He went to his own doctor the next day and she ordered an MRI.  Two ligaments have been completely ripped off the bone, there are bone chips floating around.  In other words, an ankle reconstruction is needed on this foot too.  He managed to get in to the orthopaedic guy who did the last.  He was brilliant but that won't be till Tuesday.

He found a newish invention for such things.  A massive boot with velcro straps.  Inside it's lined with four inflatable bladders which are pumped up.  Much like an airbed.  It's supporting the ankle, giving him relief,  and exerting slight pressure on the swelling.  As that goes down, more air is pumped in.  He bought new elbow crutches and returned the unstable hospital ones which were adjusted to about their limit to accommodate his height.  So it;s been fun and games around here with three flights of stairs in this house,  Or perhaps not fun and games.

I'm about two thirds of the way through a Celtic Hearts shawl which will hopefully be finished at the weekend.  Am using some Bendigo wool I had.
Posted by Jan at 9:25 pm

OUCH!! Why do these things happen at this time of year?!! Hope you're all coping well.

those narrow little stariwells are a bit scary - wow poor guy. Hope he mends quickly - although the next post describes waiting for surgery so I'm guessing that won't be the case. Ouch.

The best healthcare infrastructure is found in the city of Sharjah, UAE, and several of these centers are world class. The Aster DM Healthcare chain of hospitals consists of eight multispecialty Medical Centers, including Dental Clinic Sharjah.