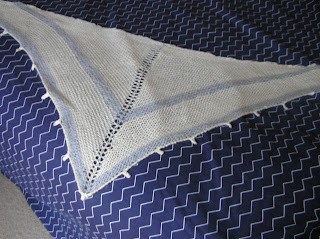 Sometimes tidying up can have unexpectedly good results.  I had a bonus when cleaning up just the yarn in my room yesterday.  An almost FO.

Some years ago, before I became interested in lace, I started a Comfort Shawl.  It was done in some Optrim purchased from Virginia Farm Works at a Spinners and Weavers Open Day.

I was soon bored stiff with the thing and if it hadn't been for the idea of the shawl, I would not have continued.  I introduced some pale blue/grey mohair, bought at the same place, to break the boredom.  It didn't, so I pulled the needles out and left undoing it till some other time.

Today I opened a bag and found the shawl.  After several years it still bored me.  Then I had another look. While the original shawl was much larger than this, it could be used as a shoulder shawl or even as a scarf.  I looked at the stitches.  All bar about three of them had stayed put and not unravelled at all.  Those three were at the end of a row and were easily fixed.  So I took it downstairs, picked up over two hundred stitches and cast off.  Forty five minutes was all it took to finish the thing and it's now added to present basket.

As I look at the photo, I see that I would prefer shorter gaps between picot edges.  This is a gap of ten stitches, because that was what worked well with the number of stitches on the needle.  I think perhaps seven or eight would be better.  It's very soft and will be pleasantly squishy around the neck in winter.
Posted by Jan at 11:15 am

Ditto.
Having been asked by my daughter to make her partner a jumper, I was a-rummaging through potential makings when I came across an all-but-complete jumper in just the right tones, that just needs seaming! Happy dance ensued.

That's so funny, two people fining almost finished things!! I can see why you were bored, though it might be good mindless TV knitting. If it is warm and soft and squishy though, there will be a happy home round someone's neck!!