the creature from the blue lagoon 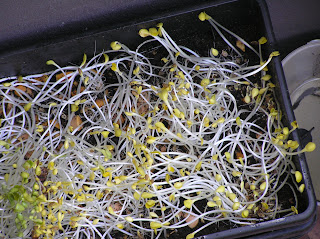 Or perhaps it's the the alien from outer space.  Actually, it's the monsters in the backyard.  DIL went to put scraps in the worm farm yesterday to find several paper bags apparently floating just under the lid.  When she moved them she found these strange life forms supporting the paper.

It took us a while to work out what they had come from.  At Christmas, she roasted several big pieces of pumpkin and  put the seeds in with the worms.  Some warm weather and this was the result.  I was surprised the pumpkin seeds had sprouted from such fresh seeds, but sprout they had.  She pulled them out, we didn't really want them growing there and left them as more food  for the worms.  When I was later watering the pots of herbs outside, I found some tiny tomato plants in the garden.  Last year I had tossed half a punnet of cherry tomatoes out there which were well and truly past their prime.  So we now have several dozen seedlings after warm  weather and rain.

Good news and very glad I am to report it.  I had a call late in the afternoon yesterday from the conveyancing solicitor. Settlement on my old home is scheduled for tomorrow afternoon and it seems all is really well with the arrangements.  It would have been today except it's a public holiday.  Then my solicitor rang with the same news and reassurance.  I really had thought it would be sorted  but I was very glad to hear it.  What I was worried about was that there would have to be a second sale.

I found another place nearby which was lovely but after doing some detective work, fund that the body corporate of teh unit block was involved in Supreme Court litigation with a neighbour.  Serious money being spent here.  Lovely as the place was, with a convenient location, good price and beautiful outlook I dropped it.   I have returned to the place I found just before the first settlement fell through and think I will be happy there.

However, I certainly feel as if a big weight has shifted from my shoulders and am now looking forward to moving.  I've been here long enough, although there's absolutely no pressure on me to move.

I might even do some more knitting.  I bought a cone of undyed superwash merino, almost 3000 metres from wired for fibre which is closing.  I know I have another shawl sort of on the go, but have started the third Shetland Lace triangle from  Evelyn Clark.  So far I'm enjoying it but there's far too little to show yet.

It's really hot here today and summer has not been too bad this year for the most part.  For the last few summers, Sydney has had quite a few days over 40° C so today is a shock to the system.  Fitting for Australia Day, I suppose.  It's in the 30s but the humidity is extreme and there's little breeze.

Hopefully my next post will be to say everything went well.
Posted by Jan at 3:37 pm

I am so pleased to read about your settlement and house-hunting plans!! Wonderful news. Pumpkins are very determined, aren't they??
I hope it is a cooler say for you soon. We have had a nice warmish 25 with a cool breeze!!

Great news Jan! I hope you are able to get the place that you have found.

Fantastic Jan....and don't worry about any penalties for the buyer if the delay in settlement was the bank's fault, they'd be totally in their rights to seek full compensation. Hope your purchase settlement can go quickly