no knitting to speak of

Not quite no knitting but close thereto.  I've been doing a few rows on the sock or the stocking stitch part of a shawl every day, but there's no enthusiasm there at all.

Settlement should have taken place on my former home late last Monday afternoon.  It's still pending.  My solicitor is still convinced it's an error on the part of the purchasers' bank.  They were given a notice to complete last Wednesday afternoon with fourteen days to comply.  I've heard from several friends who know conveyancers who all say life would be much simpler without banks and the holdup is  a common one.  It's still horrible.

The purchasers stand to lose a six figure deposit if the default.  While my share would pay my bills, I do not look forward to paying them like that.

I remember how stressed we all were over a bank error just over a year ago.  I don't want to be profiting from others feeling like that.  However, it was an auction, those are the terms of an auction.  My share of the penalty interest now being charged to them on the large sum still outstanding is about $130/day.  Again, part of the contract, but not pleasant all the same. Still it is mounting up to a washing machine or dishwasher.  The worst scene is a second sale, very definitely not wanted.  The agent could perhaps inquire of the previous bidders at the auction to see if any were still interested , but I don't want to have to do that at all.

What is worse is that after months of looking while I had no money, I did actually find a place last weekend, the day before settlement was due.  It's back in my old stamping ground.  I expressed an interest, but have signed nothing and made it plain I could not proceed without the settlement.

Then yesterday I found an even more pleasant place quite close to here.  A very pleasant outlook.  No really close shops but lots of walks along the river and the bus is no more than a minute away.  Despite the nearby transport it's quiet, on a side street with houses on one side only of the street.  And it's very, very close to a chocolate place which makes really pleasant chocolate.

I hope this matter will be resolved this week.

So I'm distracting myself if possible and am going out tonight for dinner with a friend who's up from Mallacoota for a few days.  It's about a year since I saw her.

It's blackberry time again.  We used to pick on the next weekend when we had land near Cessnock.  These are some of the bunches on the vines a few metres from my window.  There are more than last year, we've had quite a bit of rain over the last few months.  There are some tiny birds trying them out each day.  They seem to think the red berries mean ripeness. Not so.  I think the birds are finches, although I haven't seen any around before.  They are very small and noisy, the wrong shape for a wren.  They are extremely quick and almost impossible to see properly, let alone photograph. 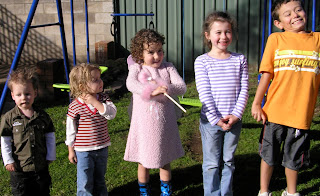 Where did the years go? My grandson fooling around on the right in this photo starts High School this year.  It doesn't seem possible.  His sister, the six year old birthday girl in pink in the middle, moves into primary school.  Mr Grumpy on the far left, who is 18 months younger than his cousin next to him  who is smaller, starts kindergarten at big school in a week.    And I think I'm in my thirties.  Not!
Posted by Jan at 2:45 pm

No really. We're both still in our thirties. There's just this space-time discontinuity that makes the outside different from the inside.

That's right. A bit like the Tardis is bigger on the inside than the out.

The dogs and I each had a couple of blackberries on our walk this evening. Love them picked straight from the bush!

Good to see you back on deck, Bron. Hope all is well.

Yes, I'm in my thirties too!!! Halcyon days.
I hope all the financial things are sorted out soon and that you can start finding a new place to live in earnest!!
It is one of those conundrum riddles, isn't it?? What's red when it's green and black when it's ripe or something.

I do hope it's all sorted out now. I truly feel for you!

Our place is stubbornly not selling. I am now panicking that we spent too much on the new house (after taking the median value of our house, after four valuations, into account) and our mortgage will have to be far too big.

I think we all seem to agree about being in our thirties for the rest of our lives!