What a horrible week it has been for Christchurch in New Zealand.  The photos show much devastation and huge damage.

I have a dear friend there who had already been severely rattled by the literally thousands of aftershocks from the September quake.  Up till the time of this new quake, it was somewhere around 5,000 aftershocks ranging from slight to quite severe.  Her cat had taken to sleeping in the linen cupboard for protection.   She was terrified of a new big quake, but what do you do?  She has a home there and little money to move elsewhere.

When I heard the news of this quake I worried for her. It was about thirty hours till she was able to get in touch with another friend on the North Island saying she was unhurt but devastated.  Said friend then let others know.  However, we've heard nothing more- not surprising really, given that there is very little power and just plain living must be very difficult.

Support from other countries has been gratefully received and I know someone in the police contingent leaving today from Australia to join other specialised teams rom here already over there. 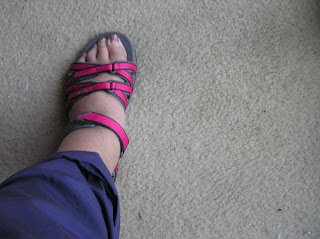 I've done little knitting at all.  Last weekend was so hot and sticky here that my undyed wool would have been filthy if I had attempted to knit.  I've been caught up with bits and pieces of stuff here, a migraine one day, the first I've had for years.

I took a bank cheque for the stamp duty out to the solicitor onTuesday and while I was out there, I had my signature on a new will witnessed.  So that's a good thing done.  Also signed power of attorney and enduring power of guardianship .  I've done what I can do to make things easier for my sons, although I sincerely hope the last two are never needed.

So the photo?  New Teva sandals.  I usually have a pair of slides around but had to throw out one pair which was very old at Christmas.  That left me with a lovely red pair with adjustable parts which were good for arthritis swelling.  However, the soles on that pair which were about five years old began to prish and cause blisters on my feet.

I decided to get some Birkenstocks or possibly some Diana Ferrari adjustable slides.  It's the wrong end of the season for much choice.  When I finally found some Birkenstocks in my size (37) I was disappointed.  The right was fantastic.  Just right, no pun intended.  The left was totally uncomfortable with a piece of bone from the fallen arch being badly squashed by the shape of the shoe.  I looked for Naturaliser or Planet shoes but there was nothing around.

After two days searching,  I found these.  Pretty colour, fully adjustable and oh so comfortable.  Not so pretty a price.  I would have preferred slides but perhaps next year now.
Posted by Jan at 5:03 pm

Yes, the earthquake is just awful. Very sad. I am glad your friend is OK, but I heard that they could be without water for months.
We are lucky, it has been cool here this week, even a bit chilly early in the morning. No matter what you want to buy, it is always the wrong time!! I think you did very well. Really, I am happy to have comfortable shoes, though mine must be green!!

I hope that your friend and her cat are ok.

Devastating - we in Sydney have been so blessed with such turmoil literally happening all around us!!