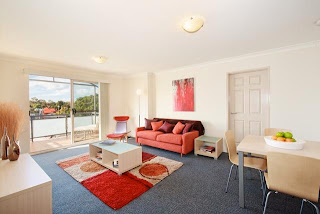 I had word a few minutes ago that the exchange of contracts on the unit I want went ahead today.  That means settlement in no more than six weeks, possibly sooner.  After all, it's not a huge place.  Tenants are moving out sometime next week.  A wardrobe will be installed in second bedroom, the whole place painted, walls and ceilings.  Then a professional clean and the carpets are steam cleaned.  These tenants have been there 5-7 years and the place has been immaculate when I've been there.

I'd give you a link to the real estate page and you could see more photos than I've saved, but that would put my new address up there for all to see and I'm not doing that.

This is the loungeroom looking onto balcony.  A new vertical blind will go on the window.  I don't really like them but it's practical as this is also a door and doorway can have blind opened.  The closed door leads to the second bedroom and the kitchen is out of sight to the right. 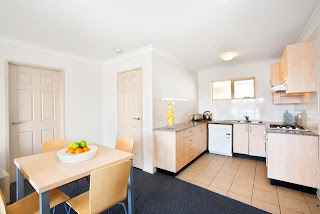 Turn around and here's the kitchen.  I'll live with it for a few months but think I will end up doing something here.  I'll update the cupboards although that may mean just new doors as the cupboards are fine.  Down the left may get some open shelving.  The closed door there opens into a storeroom as deep as the kitchen is long and probably twice as wide as the door itself.

One of my ideals was to have a polished floor and this falls down here.  Again it's something I'll live with for a while before deciding what to do.

The units are built facing outward from around a central atrium.  Not a true atrium but that's an easy description.  The small kitchen windows open onto that.  There are a lot of plants there and it''s well kept and the plants are healthy.  There are stairs and a lift and I have a parking space on the title in a secured underground car park. 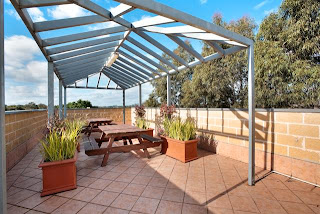 On the roof is a large L-shaped roof garden with tables and BBQs.  Apparently the agent "sort of" organised a Christmas party there.  80 people from the place arrived with lots of food, wine and sangria, and one woman had even organised a band playing Spanish music.  They repeated the performance on New Years Eve and the Harbour Bridge can be seen from this garden quite easily.

Transport is easily accessible and I can walk to another shopping centre which caters to a large Italian population so there are wonderful meats and cheeses.

So instead of building castles in the air, I now have to start making some firm decisions.  Washing machines?  Fridges?  Accent colours?  Lounge suites?  The place will be painted white all through.  I like some splashes of colour but again, I'll observe for a while before doing anything drastic.

When I received confirmation that exchange had gone through I bought myself a tiny silver house for my Pandora bracelet as a celebration.
Posted by Jan at 7:13 pm

Congratulations Jan, it is a lovely new home!!! I love the idea of an atrium and the roof BBQ/garden area. How exciting!!!! Have fun choosing all your new things for your house!!

Congratulations! How exciting! So many choices - good idea to wait on paint colour/accents etc, it's good to get a feel for the place, where the sun falls, how the light is etc before making those changes.

If you want recommendations for washer/dryer, I have Miele and they are fantastic. Expensive yes but fantastic. Would definitely buy one again, should I ever need to.

Congratulations on your new home. It looks lovely! Have fun decorating it too.

How lovely to have your won space at last. Good luck with the decorating - so many decisions but all of them delightful.

Jan,
Your new home looks like a lovely space. I'm so pleased that things are proceeding well. Have a wonderful time choosing the furniture and things that will put your stamp on it.

Fantastic, congratulations whoot whoot, so happy for you

Congratulations - it looks light and bright - I pray you will have many happy years there.