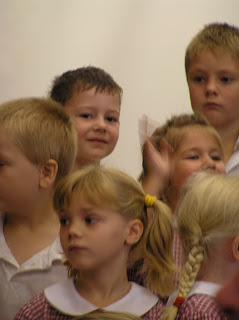 I went yesterday to the Central Coast for a haircut from DIL.  Much needed and I feel and look much better today.

I stayed overnight and son, DIL and I all went to the kindergarten presentation and morning tea for my grandson who started school five weeks ago.  He was very shy about the whole thing, although he's a boisterous rowdy boy most of the time.  He's the boy on the left in the back row.  They looked so sweet, all of them in their new uniforms a couple of sizes too big to allow for growth.

In five weeks they had come a along way.  They filed in carefully but although it wasn't their first time in the assembly hall, some were quite disturbed by all the adults and younger brothers and sister.  Four songs were sung including  B I N G O and all had actions.  As always, there was one child who did the actions back to front to everyone else.

I took knitting but didn't do any.  The train up was very crowded and my bag was pushed well under the seat.

I spoilt myself with some books which have arrived from the book depository.  Although I have the small, almost pamphlet size edition of Elizabeth Zimmermann's Knitter's Almanac, I bought the hardcover commemorative edition.  Lots of lovely things to look through in addition to what is in the booklet.

Do I need a coffee table book in my new apartment?  Probably not, but I've been meaning to get A Gathering of Lace for some time now.  It's gorgeous and some of the patterns call my name quite loudly.

The third was Knitting at Home by Leanne Prouse.  Lots of lovely things in there too.  I foresee some good relaxing evenings reading these.

Son's ankle operation was yesterday after several postponements.  He didn't go into surgery till well after 7:00 pm, having fasted from midnight the night before.

He's home now with two very heavy duty painkillers, enough to last him till Monday.  While he was in surgery the surgeon manipulated the other ankle which he hurt a couple of weeks ago when bad ankle collapsed under him.   He also studied the MRI scan done two days go.  This ankle has already had surgery one before.  Upshot is that there will be surgery on that in three months time.  So he has a full length elastic stocking on that foot to improve circulation and a plaster cast on teh other foot.  He sure does things properly!
Posted by Jan at 5:52 pm

Cute grandson - I have all that to look forward to!

Your son doesn't do things by half, does he?

We have a "not for coffee" table - a chrome and glass affair (ah, the seventies) given to WM for his 21st birthday by my aunt and uncle. It holds my folded blanket that is waiting for the ends to be sewn in and some other knitting detritus,and is tucked away in a corner with things in front of it to stop GS#1 climbing on it!

There is nothing sweeter than Kinders singing. And there is always one doing the opposite thing!!
I hope your Son is not feeling too poorly. He's really gone the whole hog with both ankles hasn't he??
I have a Tea Trolley but I never use it as a tea trolley. It looks like it belonged to Buck Rogers!! I think you definitely need the books, coffee table or not!!