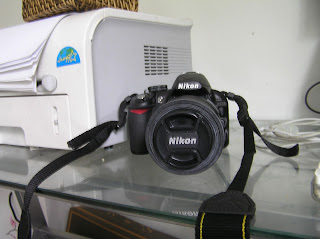 A present for me from me.  I'm not too sure how I'll go with this.  I'm not very computer savvy and my eyes tend to glaze over when I read camera manuals, but I bought a digital SLR.  It came from Digital Camera Warehouse with branches in Sydney close to me, Melbourne and Brisbane.  Prices there were far better than any I had found elsewhere and they also sell online.  My friend had the basic lens for the camera and I'll probably get a wideangle lens when I have a bit more experience with the camera.  He also has a camera bag which suits the camera and he'll lend me this me.

He came with me for moral support. it's not far from where either of us live.  I couldn't fault the service.  As I said I don't know much about cameras. let alone SLRs and I am sure I asked some stupid questions.  The salesman was very polite and answered in terms I can understand.

My old Olympus has done very well.  It's had a lot of use over probably eight years and perhaps a bit more, and it's getting quite tired now.  The battery is also wearing out and not holding its charge well and that's another almost $100 to replace it.

One thing is for sure - I hope I never have to take any pictures like those coming out of Japan now.  They are horrifying. Truly horrifying.
Posted by Jan at 3:33 pm

Exciting purchase Jan! I hope you are able to take many knitterly photos with it!

Wow, we'll be seeing some even more fabulous photos!! I like to think about you taking a photo of your new camera with your old camera!!

I saw the title and assumed you brought something for the new home!

I wish you many happy hours as you play with your new camera.

WM is going out with some guys from work to take photos this Friday afternoon/evening. It's been a long time since he's done that - it'll be good for him!