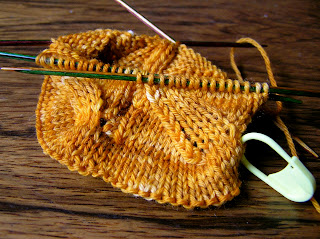 The first day of Autumn here.  Not that you'd know it as a top of 36°C has been forecast.  It's quite warm, over 30° but not yet to forecast temperature.  As often happens, it's mid afternoon and the thermometer is still climbing.

So I pulled out the second pattern for the super sock club 2011.  It's Nutkin, much to my relief.  Admittedly I was carrying some baggage with me about the stitch used in the Shur'tugal socks, but I gave up on them.  Hated the pattern stitch although the design looked good in socks.  If I see a twist or something about arrowheads again, I'll know to check the stitch.

So here's the hem and the first pattern repeat for Nutkin.  This is my second pair to this design.  Ten easy, intuitive rows to the pattern, very easy.  My first pair didn't twist and I'm hoping this is the same.  I see some discussion about possible twisting on the club's board on Ravelry.  The marker is the beginning of the row as I've concealed the cast on thread inside the hem.

The wool is from Needlefood, now not operating, in NZ.  Their wool is very pleasant to knit, although this lot seems a bit splitty.  The colour is Hokey Pokey.

These socks won't take long and I've forgotten the next pattern for May.  So a surprise to follow.  At least the nasty taste in my mouth from abandoning the Shur'tugals should be muted with this pair.  Then again, no knitting police, OK?  At least I'm not concealing the fact that I abandoned them. 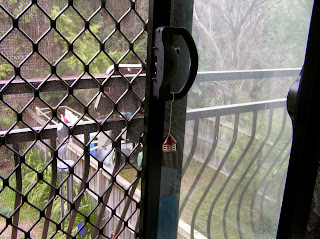 I had an embarrassing moment this morning.  A couple of years ago I made several pairs of lounge pants from the Amy Butler book, In Stitches.  One pair in particular has been wonderful.  Just right in fit, made from an op shop sheet, very comfortable. I wear them often. I did some washing and draped it as I often do over the rails you can see and from various other hangers.  I put the pants over the floodlight because I knew it was charged.  Unfortunately, I wasn't careful and put more on the outside of the rail than the inside as I usually do.  An enormous gust of wind carried them away and i didn't realise for quite a while that they had gone.  I looked downstairs  but no, nothing.  Eventually I found them over the fence, under next door's BBQ!  I summoned up courage and went to see if anyone was home as there are many young men who live there.  The one who was at home thought it was a huge joke, but retrieved them for me.

Yes, the glass is dusty but I cannot reach it at all.  You are looking through two panes there and only one is a door and movable.

Late on last Saturday I had an email from the fellow representing the group I am buying from.  The place has been painted and professionally cleaned, blind and wardrobe ordered but not fitted.  Now settlement is on 24th March, no later.  Would I like to get the keys on the Saturday before and keep them.  I could do  a pre-settlement check and arrange deliveries for appliances like fridge and washing machine.  I wasn't to move in properly but that's OK.  My solicitor approved so things are on  the move.

I spent yesterday opening accounts for gas and electricity and combing websites for quotes for insurance. Companies want a great deal of personal information before there is even an opportunity to start the quote system.  Not only that, but the sites are misleading and it's a bit like trying to compare apples , oranges and cucumbers and find the right answer.  It took me hours, and I felt quite addled when I finally made a decision and took out a policy online to start on March 19th.  One site wanted all personal info then info on the place itself.  I had already selected the type of insurance I was after and the first thing they want is the address.  After pages of questions and lots of info about me, I finally was told that they apologised but didn't cover that area.  I was very cranky.

I have just realised  there will now be a double anniversary on March 19th.  That was the day that I made myself sign application for divorce papers.  A year later I get the key to what I am buying.  It also happens to be ex-husband's birthday.  I think he still answers emails but is very cagy about his whereabouts.  None of his sons has any idea where he is.
Posted by Jan at 4:28 pm

Hooray for Autumn, it;'s nice and cool here with the wind whipping the golden leaves about. I think the colour of your Nutkin socks could not be more perfect.
The companies make it their business to be unhelpful I think. I had the same trouble when trying to sign up to ADSL2. After all the forms, they said Yes!! on the internet, but it was wrong.
Congratulations on your upcoming anniversaries!!

The opening paragraph to your post sounds almost identical to the post I wrote this morning! I didn't publish mine as I was waiting for WM to come home to take photos. He came home but then we went shopping;alas, no photos - post edited and published!

The sock yarn in pretty - Nutkin suits the colouring.

Things are becoming very exciting on the new home front too!

What an exciting time for you, but lots and lots of work and fiddle.