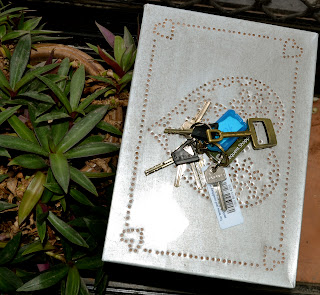 ...never been 21 before.  Well I can't say that bit about being twenty one, but I do have the key of the door.  The keys to my new place.  I picked them up this morning.  While I haven't settled yet, that's early Thursday afternoon, I was offered the keys so I could get appliances delivered.

It's wet today, very wet.  Bucketing down at times which is a change from the miserable bits of drizzle we've had lately.  I came down with several bags to take over, quite prepared to walk down to Parramatta Road and catch the bus down.  There are two stops handy.  When DIL saw the rain, she offered to take me.  I know she had reservations about my judgement in buying the place.  Fortunately she loved it.

So now I have keys, lots of keys.  My single key has looked lonely on my keyring for the pst year since my other ring was  stolen in the robbery here.  I can't say it looks lonely now.  There are keys to the security front door. Window keys, front door key, balcony key, key to the level from the outside of the fire escape which also leads to the roof area.  There's a letter box key and a key from the lift to outside.  There's also the automated door opener to the security garage door.  Not only that but I was given at least another six keys in an envelope which had the apartment number on it.  I have the locksmith coming on Friday after settlement to change the locks, so when he's gone I'll work my way through things carefully and ditch the rest that have no uses now.

The new wardrobe in the second bedroom is huge with lots of storage.  It looks good and I'm pleased with it.  While I don't like vertical blinds much, the new one in the loungeroom onto the balcony looks presentable.  The fresh white paint all through has freshened everything up really well.

I went to a local branch of my bank on Wednesday as I was under the impression I needed to get them to note I would be wanting a large bank cheque.  Oh no.  They don't work like that now.  I would be sat down with two bank employees and asked to narrate my life with full evidence of everything in five minutes flat.  Then they would consider if I could have the bank cheque in exchange for my money.  I was not happy.  They were very polite but firm.

So I emailed the solicitor and asked him to obtain settlement details ASAP in case I had to wrangle bank.  They came on Thursday afternoon.  I went to a different branch with a pile of (unnecessary) ID.  No problems so I found myself with a large folder of important bits and pieces and a cheque.  I caught the train out to Penrith and gave the cheque to teh solicitor.  It's now in their trust fund, but at least out of my hands.  I've done all I can to ensure smooth settlement.

I took some measurements while I was there with DIL and have ordered online a fridge and a frontloading washing machine.  They'll be delivered Tuesday.

Son is beginning to get over operation although he can't put foot to floor yet. He's basically cut out the heavy analgesics and is trying to cope with just  a couple of nurofen a day.  He was taking two different morphine based pain killers several times a day. He'll be given a lighter cast on Tuesday we hope.  I've spent a lot of time this week knitting him a fairly plain hat.  I made him an alpaca hat, black a few years ago and this one is in Bendigo grey 5 ply.  Very plain, basically 2x2 rib.  There are no photos yet as the last few stitches need to have yarn threaded through and darned in.  It was monotonous knitting but useful as it freed my mind to plan moving etc.
Posted by Jan at 4:17 pm

How exciting to have the keys already! I'm sure settlement will go smoothly, and that you'll soon be proud home-owner again. I hope that it proves to be a very happy place of sanctuary for you.

Congratulations, that's fabulous news and even more exciting that you have the keys in your hand!!
Silly banks, they can be very unfriendly.
Soon you will ensconced in your new home!!
Hope the ankle is feeling better soon, what a pain. (!!)

Ooo! I'm so sorry you didn't tell me you were coming this way - we could have met for a cuppa.

Congratulations on having the keys. I can't believe settlement has come around so soon. DD and SIL were exactly the opposite as far as keys were concerned - despite having a front, back and two sliding doors, keyed window locks, and a garage with roller door and side door, they were given only one key on settlement!

Congrats on the new place! I hope you are very happy there :-)
A new fridge and washing machine sound lovely (oddly enough, I have a new fridge in Sydney and a newish washing machine in Melbourne).
Meeting up would be grand. I shall have to learn to find my way around Sydney - I can do that!