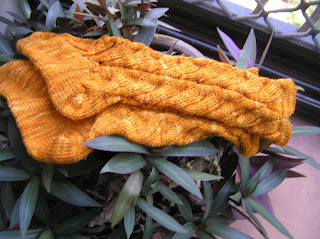 Ta da!  After chickening out on the previous set of socks, here's the next socks, due April 30.  Nutkin, my second pair.

Some sock club members were worried about twisting and fit.  These go over my feet well, no sign of twisting at all.  The first pair was fine too, so I didn't expect problems.

The pair is finished early, very quickly.  They are a very easy knit, I'd done them before.  I had a terrible cold which descended on me quite unexpectedly last Tuesday.  I have no idea where it came from as I hadn't been out anywhere for days except church on Sunday morning.  I can only surmise that's where it was floating around.  I've done very little except knit or sleep for almost a week.  I think I feel better now but it's left me with a terrible cough.  I was bent double yesterday morning, scarcely able to get my breath and with tears streaming down my face.  It's somewhat better today, but there's a way to go yet.

The yarn came from Needlefood. Colour is HokeyPokey.  I still have some of their yarn in my stash and hope it's not like this skein.  I've used their wool before and really liked it.  Not this skein.  It was splitty all the way through.  Sometimes the plies were so loose I could see each strand for about ten centimetres.  Sometimes, there were little loops of one strand poking up.  About six times through the skein, the yarn appeared to have been rubbed by a heavy duty piece of steel wool or similar for about twenty centimetres. Certainly not up to the standard I expected  and had seen from previous skeins.

So with this selection of sock already done, all I have to do now is keep track of the bag which has the yarn and patterns for the rest of the year.  Hopefully I'll know just where it is when i get boxes unpacked from my move and want something to sit down with to relax in the evenings.
Posted by Jan at 3:53 pm

Oh Jan, I hope the horrid cold goes away quick smart and you feel well soon. You knitted those socks a the speed of light!! I think the colour is prefect for the socks. I hope your other wool is better quality.

Hope you're feeling much better soon. The socks are gorgeous; it's a shame about the yarn though.

How's your Mystery 220 project coming along?

I hope your feeling better soon. I love the color of the nutkin socks, hope you dont have another splitty skein.

Hope you feel better soon. I have had a cold as well.

my goodness you were fast off the mark with those. Well done! They look wonderful. I'm really enjoying making them.