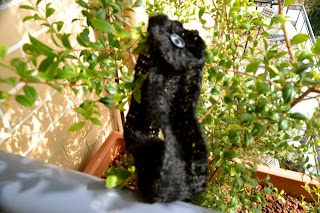 A short and snappy entry this morning as I'm due out the door very shortly.

This headband was also short and snappy to make and used some leftover, probably vintage yarn I bought some years ago.  It was old then and had a wrapper stating kid mohair on it, a Woolworths name(!!) and it originally cost 2/6. The price in itself betrays its age as decimal currency came in  on 14/02/66. I bought ten balls from a Melbourne warehouse for $2.50.  I've used some in various bits and pieces.  I doubt it's kid mohair, it's not soft enough.

However this is  a  small something for Miss Ten  who is coming  with her brother and parents for lunch today.  The tiger toe socks below are for him.

The button is  also well and truly vintage from a bag of over a thousand which was given me by a friend.  His mum had been a dressmaker and these were what I would call stash.  As she died quite a few years ago and hadn't sewn for a long time before her death, I really can't put an age on the buttons but they are definitely quite old.
Posted by Jan at 10:33 am

I'm sure grand-daughter will love it.

Great job in your talk this morning! I really appreciated it.

So glad youmanaged your move happily! So did we. And like you, we bought new appliances and are making decisions and still haven't unpacked everything. Good luck and enjoy it!