a picture is worth a thousand words

I haven't heard that saying for ages, but if it's true then this post should be several thousand words long. I'm hoping all will load today. 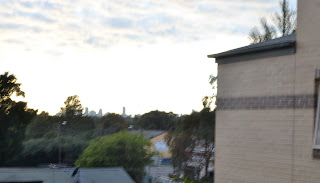 This is a very early morning shot of the city skyline from my balcony. I'm just starting to use my new camera again and have been fiddling with settings.  I have very little experience of this, so sometimes it works, sometimes it doesn't. I've always had a point and shoot type of camera before.  Just before I moved I had bookmarked several sites on using it and was working my way through the manual.  Unfortunately, I forgot most of that when I moved and I was too tired at night to concentrate, so really I'm starting all over again. 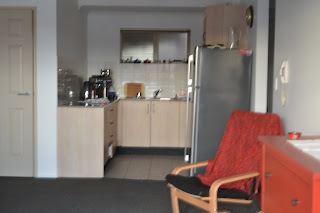 This is my kitchen and my new coffee machine.  The door to the balcony is behind me.  The windows open to the atrium outside and the stove is hiding behind the fridge.  It has a gas cooktop and an electric oven and works pretty well, although the burners don't always light automatically despite a good clean.  Earlier this  week, I wondered why dinner was taking ages to be ready.  The fan forced element had died.  The stove is ten years old and these things are odd.  They can go quickly or last for years.  I'm experienced in replacing plug-in elements but this was different.  I rang a company in Canterbury where I had bought elements in the past.  That was 9:15 am.  It had been replaced by 12:15 the same day.  Cost $177 with a callout fee of $89.  Ouch! 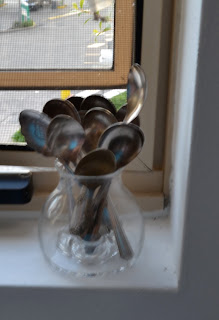 Imperishable flowers!  I've found all sorts of things as I've unpacked.  I had silver dessert spoons of my own but this selection was in a box of Mum's stuff. They are all shapes and sizes.  I like the taller spoon in the group. It has an engraved handle and an unusual scooped bowl.  The spoon at the very front centre has no handle and is brass.  It's a jam spoon with an ornate etching on it.  Really,  there's a limit to how many such spoons one person can uses, so I put them in a small Orrefors vase and put them on my bedroom window sill where they catch the early sun. 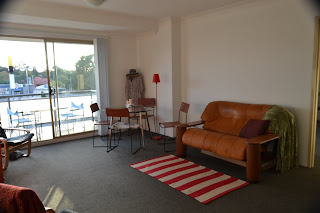 The lounge room and doors to the balcony are shown here.  I bought a small circular glass table from IKEA and like it very much.  The chairs which I remembered as black leather and chrome came from Mum's dining room.  Still leather but it's brown and the frame is black.  Mum bought them many years ago and they have had a lot of use and still look as  good as new as they have been well made. DIL "lent"  me the lounge shown here.  It's leather and the wood is palm.  She had two three seater lounges like this and this two seater.  It was too much in her current lounge room, so I have benefited.

I love my new Bosch front loader washing machine.  It's super quiet and does a great job washing.  Even better, its spin is  superb and the clothes are well on the way to being dry when they come out of the machine.  I can set spin speed and water temperature and can also set it with a time delay start.  There is a lot of choice in cycles as well.  The dryer was here when I bought the place but I find things dry very quickly on  the balcony. 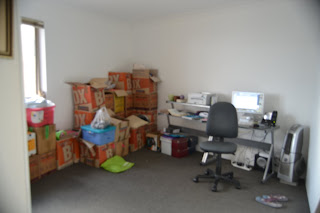 Part of my second  bedroom and boxes still unpacked.  To the immediate left is a large built-in wardrobe  which was built before I moved in.  Lots of drawers, hanging space, a big shelf at the top.  There are probably five boxes my sister brought down hidden in the the wardrobe.  My computer was  an "L" shape but I've undone it and put both pieces along the wall.  There are bookshelves to go in here and probably a sofa bed for grandchildren to sleep in.  The wall the computer is on is actually at an angle and the room is not a true rectangle.  That's because of the fire escape stairs which are on the other side of the wall. 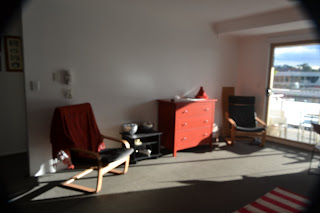 Here's the early morning sun coming into the lounge room.  This morning was odd.  I would grab the cameras and the sun would disappear behind a cloud.  Just after taking this photo, it came out very strongly but had gone by the time I worked out settings on camera. 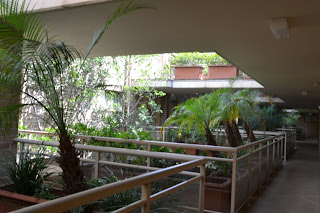 This is taken straight outside my  door.  Each floor has similar areas and there is a very large L-shaped roof garden with  a BBQ and tables and chairs for residents' use. Also a toilet is there.  I haven't been up there since I moved as I am currently using the lift because of  my injured toe and it doesn't go that far up.  I would need to use the fire escape stairs. 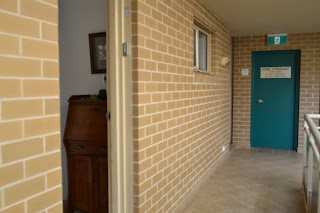 My front door and my oak desk given me by my grandmother when I was still in high school.  It wasn't new then.  Last year DIL's dad refurbished it for me and would take nothing for his work which he does as a hobby. The locksmith who changed the locks for me was impressed with the building standard through the block.  Apartment doors are true fire door standard and he said the frame was also the legally required strength.  He commented that many building have external door set into cheap and nasty frames which could be easily broken.  Not these.  Next to the fire doors is an alcove with an extinguisher and a fire hose and there are probably three of these on every floor. 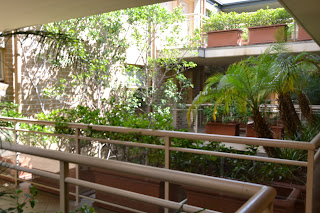 Finally and a lot of words later, the view  down the other way.  Each floor has gardens all well cared for.  This looks the other way down to the lift and stairs. I came out the other morning and was met by the strong perfume of gardenia flowers.  There were probably about twenty flowers just opened in this area.

I see the sun here through my kitchen windows although it doesn't actually shine through them.  I have cover from the lift to my door and plenty of dry space to put any shopping  down while I manipulate the lock and the door catch handle.

Great to hear from you again Jan! Your new place looks lovely! I'm sure you'll be happy to have a place to yourself.

I love your tour and your new place is lovely, quite light and so much greenery outside. So lucky!!

Thank you for the tour of your new home.

I've been doing some moving of my own - quite unexpectedly! I will post about it soon.

I hope you will be very happy in your own nest. It looks lovely and sunny.