At long last, I'm back.  I had been told that today was hopefully the day T.....a would switch things around at the exchange and I would have net access.  I came in just after lunch to give it a try and saw my new wireless router with lights ablaze and burning steadily.  So I called up a site and found it really was working.  I've been checking mail on my phone and sneaking the occasional peak at a few favoured sites.  However, the monthly allowance on phone for data is 100 meg.  Wireless plan gives me 100 Gig/month which is a ridiculous amount.  However other plans gave very much less for not much less expenditure so son and I went for the bigger amount.  No worries about downloading anything at that allowance.  Its ADSL2+ and from what I've seen is very fast indeed. 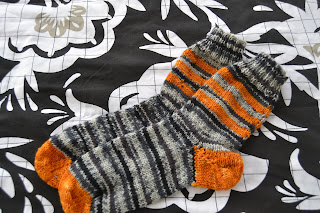 So some photos.This is about all I have knitted in the time I've been offline.  I'm calling these tiger stripes and they are for Master 5.  Some really old Patonyle and the very last of the hokey pokey sock wool from Needlefood.  His favourite colour is still orange but I think he'll be happy with the stripes here.  With him now at school,  they won't get as much wear during the week as the last pair I made, but I'm fairly sure they'll be used as bedsocks when it gets cold.  Last winter I found he was still wearing the socks made the previous year, even though  the heel flap then was under his instep.  I think  he'll like these. 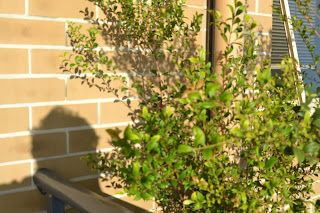 Lots of photos now.  Looking back to my bedroom  window from the balcony.  I get lots of sun now but think that it won't shine directly in in summer as the sun will be higher.  I face north-east and get early morning sun across the three rooms which face that way, a bedroom either side of the lounge.  Lounge and kitchen are the one long room and the bathroom is behind the main bedroom.  There's only one common wall as I am at the end of the row next to the fire stairs which also lead up to a lovely, large roof garden where there were several parties over the Christmas/New Year holidays.

OK, I'm having trouble loading the photos so will try some more tomorrow.  It's very busy outside but I like it.  It was one of the things I liked about being even closer to the city than here.  However, to get what I have here, I would have paid another $80-100,000 and perhaps had a view of someone's bathroom window.  There is always something happening and something to watch.  The apartments are built around an atrium so front door opens on to that and they face out.  They are well kept and clean.  I'm on the second top floor of four.  Each level has gardens in the atrium and the whole of the garden areas are open to sun and rain.  I have plenty of cover from the lift or the stairs to my door.

I'm not all unpacked yet.  I have to buy bookcases so have many boxes still with books in them.  Clothes are unpacked but I want another set of drawers and also a sofa bed for the second bedroom which is quite a large room.  I was not expecting my sister to bring down eight large boxes of things from mum's place.  They are still to be opened and I hope there is less rubbish in them than in the boxes she gave me just after mum died.  I don't mind sentimental type things but truly there was a lot of rubbish I didn't even recognise which I think she passed off to me.

There have been few casualties  and little has been broken in the move and the earlier storage.  That is, apart from me.  I was here early in the morning on the day of the move and decided to do what I could while I waited.  I dropped a very heavy piece of metal bedframe on right big toe and several others.  I nearly passed out from the pain.  I think I broke big toe and the others were badly bruised.  I have badly damaged the nail on the big toe, perhaps causing permanent damage.  The nail is barely hanging on in the centre and is loose all round.  I'll spare you the photos.  Sons and DIL are privately concerned but told me off for being too independent.

I have a bus down main road outside and another just around the corner.  When toe is recovered I can walk to FiveDock shops quite easily.  There are lots of good delis and bakeries there as there is a large Italian population in the area.