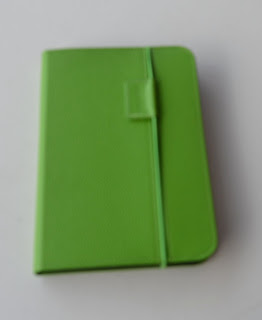 I  had planned on being out of the place this morning fairly early, but forgot my plans  when I woke up.  Put washing on and had a leisurely read of the paper while I ate my breakfast.  Mum would have been horrified.  Certainly no reading at the table for her, even when she was by herself.

The security buzzer went and there was  a UPS man wanting entry to the building.  I had ordered a Kindle last weekend and was expecting it to arrive on Monday. Perhaps.  It was early.  So I've spent the rest of the morning fiddling.

I plan to use it  to hold books, there are thousands free but I have actually purchased two and downloaded them.  The two I've bought are what I'd call manuals for my new camera and they come well recommended.

I've tried to connect to my own wi-fi network instead of their 3G network,  using my coded password records.  Never had problems before and my iPhone connected just fine.  One of my computer whizz sons will be here at the weekend.  He set it up and he can hack back into it for me and I'll join the Kindle to my own network.  I can see at least a dozen neighbouring wi-fi set ups including MacDonalds from downstairs and out the front.  No problem usually in decoding my notes.

Another use I intend to make of it is for patterns.  PDFs are easily downloaded and I've set up a shawls folder already. 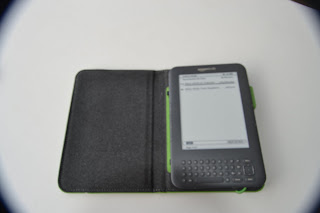 The interface is very clear and easy to read and there is a light in the cover.  Not planning on using that now, but it's there.  I bought a Kindle a few months ago as an expression of thanks for the support from one particular friend over a long period of time.  Strong shoulders and a listening ear and good, well considered advice for me.  I have always intended to get one and almost did then.  Now our dollar is s much higher than it's been for a long time, this was cheaper than the first I bought.  I know a high dollar causes problems in other areas, but right at the moment, I'm being selfish and making use of it for myself.

At a family reunion last week I was using my phone to retrieve info or something similar.  The wife of a long unseen cousin remarked how brave I was to be up with technology.  My jaw dropped and I actually didn't know what to say.  Anything I thought of sounded like boasting or putting her down.  With two computer gurus for sons and a more than competent  in that area  third son, I would be hard put to be illiterate.  They make me find things out for myself and only interfere when something major is planned.  They expect me to be able to do stuff, so it just happens.  She was afraid of even entering a contact to her phone.  I showed her some useful applications  but she just shook her head.
Posted by Jan at 1:19 pm

It is a beautiful green Kindle. I am sure a technical whizz will get it up and running properly tout suite!!

My mum, aged 76, has a mobile phone. She doesn't know how to send or receive SMS. She has some messages on her phone that have been there for years but have not been opened by her (thers have opened them and read them to her, months after they were sent).

I have a basic $49 phone (that's the price I paid for the phone, not a monthly contract plan) - I only want to send and receive phone calls and SMS. I spend less than $100 a year on pre-paid credit. I own a digital camera (with video facility) and can use my iPod for the same purposes. I have an aversion to using phones; our landline bill is usually more than 50% rental!

SIL works for a telco. He has an iPhone and is rarely not on it!

So we have all levels of phone usage in our family - just as you do in yours!

As for the Kindle, I have been considering one for a while now but I really want to buy a good sewing machine (which I would probably use more).