I've been busy and BLOGGER was uncooperative for at least two days last week.  Possibly more.  I've also had a nasty tummy upset and any information about that is more than anyone wants to know.  DIL took me back to IKEA and we exchanged the door with the broken glass for another whole door, taken straight from another box.  I hope no other purchaser finds themselves short a door, but I can see it could easily happen.  I spent quite a bit of money on the shelves for my storeroom and now have them up. 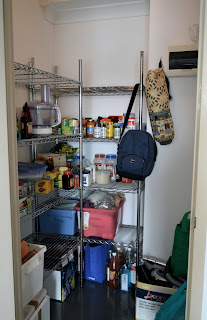 The longer shelving to the left was erected twice.  I had it all done and found it was too bug for one person to stand up.  Then DIL and I discovered that it would not go into the space allowed by less than a centimetre, taken up in the door frame.  We undid it and put it up inside the storeroom and it just fits in nicely.  The shelves are more than twice as wide as the temporary shelving I had there.  I even have boxes of stash across the top which is not really convenient but I have strong steps and really, how often do I need to investigate it.

Some boxes have been in and out a couple of times and may yet move until I find where they really work properly. Practically every time I go shopping I buy something else needed for general household living. Today it was a very expensive chef's knife.  I have good smaller knives and didn't want a block and a full set,but I've been used to a decent sized chef's knife so bought one.

With the new cupboard in the lounge, I've moved plates etc to there and freed up some space in the few kitchen cupboards I have.  All the plastic ware has been sorted and is no accessible. 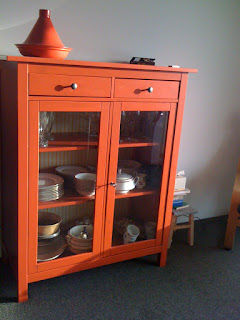 Here's the larger cupboard.  Wine glasses are now accessible on the top shelf but I need to buy some glass tumblers as I have only one or a  few small whisky style glasses.  Even they are small than the usual for that purpose and a couple of times I've been tempted to have two gin and tonics before dinner.  I haven't, I've stuck to one.  I've been able to unpack some really old stuff, vegetable dishes and meat trays from my grandmother.  I think that clicking will enlarge any of the photos.

The drawers which were here are now in my bedroom and again, more sorting has been done.  Winter woolies are easy to reach which is just  as well.  A couple of weeks ago, the mornings here were down to about 3° C but lately they've been higher.  However, a cold change came through here about two hours ago and the temperature has dropped considerably and it's raining.

This place is delightfully warm for a large part of the day when it's sunny.  It's three rooms wide and the lower winter sun streams in and warms the place up very well indeed.  It cools quickly from mid-afternon, again because it's three rooms wide with a large area of glass in each of those rooms. 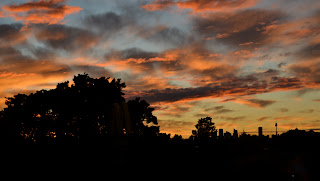 This was taken about 6:45 this morning and is the reason for the title of this post.  True to the saying, this beautiful sky did not last much past lunch.  It's now grey enough to need a light on to read and is much colder than when I was  waiting for the bus to the shops.  It's taken from my balcony, looking toward the city skyline and I like the silhouetted outline of trees in the foreground as well as the buildings standing out against the sky. A larger picture by clicking shows the sky really well. The clouds are intensely coloured.

I have about 250 metres to knit on the striped study shawl and a lot of ends to sew in as I used individual balls of Bendigo's Melody in deep forest green and black.  Just how much depth those 250 metres will add to the border, I'm not sure.  There are over 300 stitches now and while they move around on the needle, I can't spread it out for a photo. Each row eats up a bit more wool each time.  I'm going out for lunch on Thursday and would like to wear it so I can see some time tonight and a good bit of tomorrow doing it.  I bought a TV about two weeks ago so knit while watching.  I am unaccustomed to watching TV, haven't seen any for 17 months and really little has changed.  Many of the ads are the same and  very little seems to have happened in the programming.

Now I need to decide on dinner.  Lunch was very good pumpkin soup, one of the nicest batches for quite a while and some homemade fresh bread, also very good, a mix of rye and multigrain.  Something easy and I can knit while it cooks.
Posted by Jan at 4:29 pm

I was not awake early enough to see that sky and since my bedroom faces west and the sky was cloudless in that direction, I wouldn't have seen it even if I had been awake!

Instead, I woke up and thought, "Oh good, blue sky - washing". By the time I put the second load on the line, I was praying it wouldn't rain till I got home from taking DD to the the ostetrician. And, guess what, about half an hour after I arrived home and brought the still-damp washing in, it began to rain!

You seem to be settling in well; I hope you are feeling much better than you have been.

Funnily enough that saying was the first thing that popped into my head when I saw the sky yesterday. Your new shawl colours sound lovely, can't wait to see a photo