so what will I do now 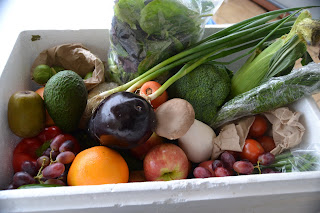 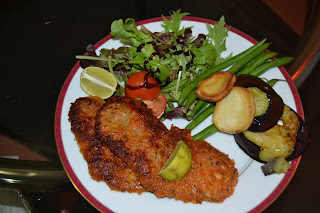 Since I finished my shawl, I've been at a bit of a loose end.  I've started a couple of things but have pulled them back, not happy with either.  I think I may make some beanies for my friend in Christchurch, NZ.  She works at a school and several dozen beanies for pupils were donated, but more could be used.  She also knows others who would appreciate them too.

She emailed me the other day to reiterate how tired she is of aftershocks.  There had been thousands between the shocks in September and the next big one.  She said there had been one of magnitude 3 the other night, but she had woken in a panic sure there was another huge shock.  Turns out her cat had jumped on her in bed  from the top of a wardrobe!  Almost two metres away.

I decided that if Cindy can post about  food, then so can I.  She is cooking her way through the alphabet and today has spicy kumara wedges.  I had another for "K".  The box of fruit and vegetables has a King Brown mushroom in it.  It's the funny looking bit slightly right of centre.  I hadn't tried them before and I cut two slices from the stem.  On the plate of food they look a bit like potato slices.  They were delicious, a rich, strong flavour and a good texture.  I must keep my open for more.

I've been having a box of fruit and veg delivered once a fortnight.  It would have pretty much the same selection as this box but more of everything.  I had some left so bought a small box today.  I have some control over the contents but am mostly happy to get a surprise.  There are few things I don't eat as far as fruit/vegetables are concerned.

Neither of the two large supermarkets here delivers any more, although it's possible that they do from another suburb, more of a nuisance to get to.  I don't have a car and don't intend to get one.  My eyes haven't been the best for driving although once upon a time I drove many miles.  I would need to go out for fruit etc every few days as I can't carry heavy stuff home, particularly in the bus.  So I'm happy for the delivery.

There are over twenty different things in that box, really just a sample of many.  The plate is tonight's dinner.  It looks like a lot of meat, several meals for me, but it's veal parmigiana and the slices are very thin indeed.  Had they been the usual thickness of steak, that amount would be more meat than I eat in two weeks.  Eggplant, fresh beans, King Brown slices, and some salad greens with balsamic glaze on them.

I do a stocktake of the fridge before placing an order.  Sometimes soup is made from what's left.  That's good for lunches especially in this cold wet weather Sydney is having.  It's bucketing down now.  Again.  Leftover fruit is cooked up to go on my muesli and all is ready to start again.
Posted by Jan at 8:45 pm

I have never heard of a King Mushroom before, but it looks delicious on your dinner plate. Those boxes are a good idea. I had a delivery like that for a while but it just petered out.
I hope the weather clears for you soon, we've been promised no more record breaking rain here in Winter, so I wish the same for you!!

I'd like to wave the rain goodbye - where is our normal sunny winter?

The box looks good and healthy; we should probably see if there is somethng like that happening around here. We tend to buy the same old fruit and veg every time, no surprises, no challenges!

Beanies are good knitting - quick, easy, portable, and no need to create an identical one! I will cast on for the June Mystery 220 today although I really should cast on some socks which I need desperately.