is there such a thing as too much sock wool?

I doubt it, I've used sock wool for shawls, scarves and berets as well as for socks.  If it's Patonyle, I'll buy it because I like to have it on hand.  Great for all socks, especially children's.

I went to Spincraft in Sydney today for the ribbon.  I won't be going there in a hurry again, if possible.  It was worse than a jumble sale, even worse than many Spitfight shops I've been in and they seem to be lifting their game somewhat at the moment.  Stuff was everywhere, including on the floor.  I think that was because bins were overfull and even brushing past them caused a cascade of items to the floor.  Most of the yarn was acrylic, 100%, and I wasn't interested. 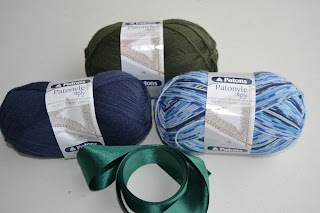 The end of practically every aisle had a screen playing  some form of tutorial, always loudly.  Over the top of it was some radio station playing something very mediocre.  Noise and mess - I couldn't get out of there quickly enough.

So what did I buy?  The Patonyle in the picture and the ribbon, which was the original reason for braving the place.  Now I think about it, Woolworths at Town Hall Station  sells spools of ribbon, I should have checked there first for colour and width.

I have a very warm, quilted silk jacket which has had a lot of wear.  I've been wearing it for the past week.  We've just had the coldest May for a very long time and Sydney has been extremely wet.  Very heavy deluges of rain which have fallen with little warning.  I've lost two umbrellas this month by having them blown inside out.  The jacket has been quicker protection than an umbrella in a deluge and gale.

I put the jacket on yesterday to discover the cuffs are worn out.  Little splits down the cuff all the way around the wrist.  The rest of the jacket is in good condition despite the use.  I decided I'd put some braid there as reinforcing.  No braid in width needed.  No grosgrain ribbon in proper colour, not even black.  So this is what I bought and I think I'll try sewing it by hand.  A bit like the edging on a quilt.

Sigh.  They just don't make things as they used to.  After all, the jacket is only just over twenty years old!
Posted by Jan at 2:49 pm

A friend and I were discussing the very same topic, nothing is made to last anymore is it. At least with our handknits we know they are made to wear well. Patonyle is great for socks but I will have to try knitting some berets and hats with my sock yarn stash too.

I expect your coat is very nice, looking at the colour of the ribbon!! We are all about the make do and mend here too. I like things to last a long time, and some things just have built in obsolescence.
Nice Patonyle your found there!!
I hope the rain holds off for a while, it has been the wettest Autumn here for many years.

Twenty years and not holding up - dear, dear, dear ;-))))))))
Why can't we have craft/wool shops like we see in America - space, gorgeous wool and variety (I hear the prices are good too). And yet we produce the finest merino :-(
I have yet to see any Patonyle and I don't go anywhere near BIG stores

I had to chuckle at that last sentence - it sounds like my wardrobe!

I agree that it's always good to have too much yarn on hand! I've not tried Patonyle; I should add some to my stash! LOL

Both of those Big Box stores are within a few hundred metres of each other in Penrith (a few kilometres outside the main shopping area where Gerry Harvey said the future of retailing would be!) S. is certainly better than L for yarn and fabric choices. I have discovered HobbySew; it's a little more expensive but the people there know what they are talking about and have great customer service. The one I go to is in Kings Park (near Blacktown); there is a brand new one at Top Ryde.