it's been a while

It's been a while and looking  back, I can't work out what  hindered me from posting.   Certainly the weather hasn't been inspiring for much at all.  Rain, rain and more rain.  Last Monday which was a public holiday, I was all set to  go  to the Central Coast to see son and his family and have SIL cut my hair.  She's a very good hairdresser and while I do pay her, it's not as much as I would pay down here.

The morning was wet, very wet.  I checked the buses to the city and found they were running  every hour.  What??  Even on Sundays they still run 30 minutes apart.  I know because I catch the bus to church.  What was worse was that there were no trains on the mainline or north shore line or from Hornsby to Newcastle. Trackwork on a holiday Monday.  I know plenty of people come to Sydney for football etc and trains are usually packed.There's no shelter where the trackwork buses go except small tents with no sides.  Two hours were allowed for my trip which normally takes 50 minutes.   Still I got to bus stop down here and it poured.  I turned around and went back inside.

I have been knitting and playing around on Ravelry.  I made a scarf for Master 5 who wanted something to go round and round his neck like I did for his daddy.  His words.  I made him a scarf in 8 ply and embroidered an initial on one end.  It worked out well, his new favourite colour is blue which is what I used from stash.  That colour has been orange for over  two years and has finally changed. I made  some fingerless gloves for his older sister and again she had just asked her mum for some for early morning rides to school.  However, I forgot to take a photo before giving these away.

I've made quite a few more little alligators as shown below and have tweaked the pattern  so they are more to my satisfaction.  Not so fat and with a bit longer tail.  I also made the tail i-cord as it's much easier to do than a tube with just two stitches on each needle.  Currently I'm doing some booties for a friend whose daughter is having a boy in  a few weeks.  I must remember photos before I send them off. 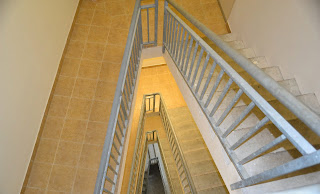 Speaking of photos.  I'm gradually getting used to my new camera.  I've taken a lot of photos, some have been great, others I've deleted as soon as they were downloaded.  As today was pleasant I went walking and took the camera.  I was reminded of the man in his 90s who walked every street in almost 300 Sydney suburbs.

I've been trying not only different settings on my camera but also different angles and techniques.  I've joined the 365 Project and am attempting a new photo posted there every day for a year.

This top photo is taken in the fire escape near my apartment.  The colours are fairly true and I like the way the top steely grey is picked up again at the very bottom of the shot.  This one reminds me of some of the work of Escher although I think that was more by good luck than good management or my skills. 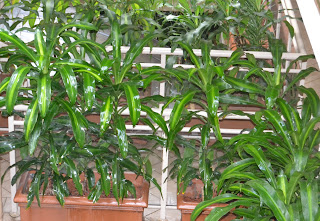 I loved the contrasts shown in this shot which is also Escheresc.  The shininess of the wet leaves against the plain rails.  The straightness of the lines of the planter boxes and rails  contrasted with the curves of the leaves.  I didn't see all of this at first, I was most interested in seeing if I could catch the shininess of the wet leaves.  So now I am spending time on looking for different angles when I use the camera.

Wasn't it lovely to see the sun yesterday, even if it was blowing a gale! Today was even better!

Have fun playing with your camera - I love your photo of the fire escape.

Worst Winter for over 40 years here too, so rain, snow, gales etc are everywhere!! The photo is very Escher!! I am sure master 5 loves his round and round his neck scarf!!!