this little piggy went to market... 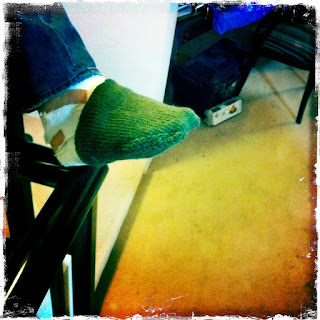 ...and these little piggies were blue from  cold.  This strangely coloured picture shows something I whipped up last night and this morning.  Son had reconstruction done on his right ankle last Thursday and his little tootsies were cold.  They would have been even  colder tonight had I not done this.  A cold change, with snow on the Blue Mountains whipped through this afternoon dropping temperatures by about 10 degrees, more if windchill is factored in.

All a bit of guesswork really, because when I saw him, I forgot to measure  how big the cast was around circumference.  It looked as if the sock would fit but I found some very wide, strong elastic, turned over a hem and threaded elastic through.  He says it's working fine.  He can't put that foot to the ground for at least six weeks and is on elbow crutches.  He also has a contraption especially manufactured for such times.  It's a cross between an old fashioned scooter and a skateboard and bike.  He rests the bad leg on it  bent at knee, and propels himself with other foot pushing along the ground.  It has a rest on it so he can keep foot up when he's sitting in a chair.  The cast goes up to his knee and is quite heavy.

Hopefully this is the end of such surgery.  This is the ankle that was mended years ago and which was torn apart again after Christmas  when the already injured left ankle collapsed and he fell heavily on outside stairs.  He always was accident prone as a boy, but has been fine for many years.  He's still on strong painkillers, two types of morphine but hates them so weans himself off as  soon as possible.  Tramadol in particular makes him hot and itchy but he needs  the  relief right now.

I've done a few more of the small alligators from the post several down from this and tweaked the pattern to suit me, and I've just finished some little booties for a  friend's grandson.  They need  ribbon or braid.
Posted by Jan at 8:09 pm

Yay for your inventiveness. I think that is a great idea. It must be so frustrating for him trying to get around and yes it would be very cold at this time of year with your toes hanging out. Hopefully he doesnt need any more surgery!

I was thinking about your son the other day when I got your email about your toe. I hope this operation sorts everything out.

They say that necessity is the mother of invention - just as well Your Son's Mother is inventive!

You are both very inventive and creative and I love the green semi-sock!!! I hope your so is feeling better?? I took Tramadol and it didn't make one jot of difference to pain.