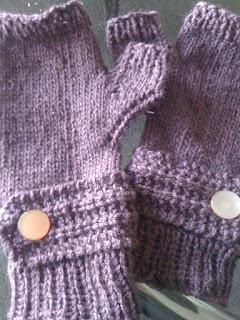 Déjà vu?  Almost.  Another pair from the Bendigo Celeste, merino, silk and alpaca.  The same pattern as shown a couple of posts down which I did for my sister.  I like the  way this knits up but sometimes I found it came unplied just a little bit.

I used the thumb gusset from the Veyla gloves and of course the buttons from my friend's stash are different.  These are really quick to make and very easy.  That is, unless you also have a head stuffed up with a cold as I do, and do the wrist band so that there are two gloves for the left hand.  I thought I'd got rid of last week's cold, but it's freshened up quite a bit again and my head is very stuffed up.  I had to unpick where I'd sewn one wristband on so I could reverse the shapings.

These are for the DIL with whom I lived for several years.  I've made gloves for her before but that was several years ago and I know those have had a lot of wear.  She'll wear these I'm sure.

Now, apart from eldest grandson, everybody has had something practical and good this winter.  I asked grandson what he would like.  However, he had been put on the spot at a swimming lesson.  His mind was on other things.  He suggested slippers but when I said knitting, he wanted them THICK.  I rang son again the next day as I'm sure we both had wires crossed.  I think grandson may have been visualising   something like ugg boots.  If that's the case, I'm happy to buy them.  If I were to put a monetary value on my knitting, I'm sure ugg boots from Target or similar would be comparable.  They'll probably last longer  too.  The family has a new puppy, just three months old, and he still has sharp puppy teeth (and nippy habits).  I don't know just how long my knitting efforts would survive with Max's current behaviour.
Posted by Jan at 10:52 am

I have to stop myself from commenting on the button collection again!

When my mother's only grandson wanted a new pair of bedsocks (it's mum's speciality - an oversized boottee pattern) he called his Nanna; and told her he wanted pink! Quite a surprise coming from a fourteen year old youth! She was sure she'd misheard but he loved them when he was presented with them (I think she made a blue pair as well, just in case!)

My grandboys have actually been using the cotton blankets I knitted before Older Grandson was born; there was no evidence of them in use last year. Makes me think I might finish the Bendigo Luxury (mint) blanket I also started!

Beautiful mittens, and I love the buttons too!! The only way to stop a puppy from chewing things is to put them up very high. Higher if it is Gilly here!! How exciting to have a new pup!!
I hate it when a fuzzy head means you make silly mistakes, glad it was relatively easily fixed!!