light as a feather 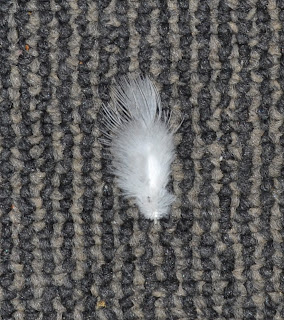 I opened the balcony door yesterday to let some fresh air in.  It was actually sunny and quite pleasant.  This tiny feather floated in and landed on the carpet.   I've been keeping the camera handy as I try to learn about the multiplicity of functions it has.  So I grabbed it and took several photos on different settings.

I can see the details of the feather here and the carpet colour is pretty accurate too.  The carpet looks great when I've just vacuumed but being totally plain, it shows every little crumb or tiny piece of paper or dropped wool.  I'm thinking of buying a large rug which would actually cover most of the main area and would not be such a pain to keep clean.  I could vacuum twice a day and still find bits the next morning.  I really don't know where they all come from.

I've never been a neat freak but find that since being by myself, I am extra careful abut putting things away properly and tidying up after myself.  If I don't do it, it doesn't get done.  When I lived with son and DIL, the place was OK as there were three of us to  do things.  Here I'm it, as I know many bloggers also are. 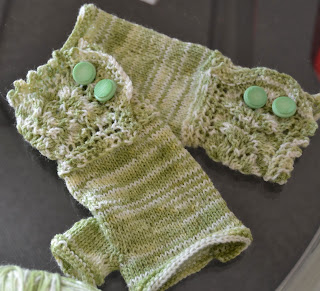 I should have listened to this wool some years ago. I bought it at a Spinners and Weavers Guild Open Day quite a while ago.  It was a miserable day and I was miserable personally too at that time.  I loved the bright fresh colours which looked springlike, full of newness and fresh opportunities and growth.  No idea was given as to length of the wool but obviously enough for many small projects.  It has a crepe finish and was classed as 5 ply on the swing tag.

I've tried it in several projects but didn't like it.   It's been ripped out each of those times. At least three times, possibly four.  I'm caught up recently in small projects which are quick and satisfying to finish.  These are for DIL married to # 2 son.  Hot off the needles and unblocked, they are another pair of Veyla fingerless gloves.  That makes a hat for my son, gloves for DIL and his two small daughters.  I've sent him an SMS asking what my eldest grandson might like.  Then that will be the whole of that family.

The buttons are yet more from the hundreds my friend gave me from his mum.  It's like a treasure trove and many of the buttons are beautiful.  I find it hard to get buttons I like which are new now.  Lincr0ft and Spitlite are not very helpful.  The button shop in Newtown is great but I am no longer in walking distance of there so I tend to forget it.
Posted by Jan at 9:33 am

The mitts are so pretty

The stash of buttons would be a most wonderful thing to have!

I often wonder what happened to the jar of buttons my mother had when I was a child! I spent countless hours playing with them!

Your camera is exceedingly good and you are becoming very skilled!!
The green mittens are just beautiful and you are so lucky to have a source of buttons, those match perfectly. You've really made (almost) everyone in your family warm with knitted gifts this year!!