a woman of many hats

I've been without internet access for  most of the last week till late yesterday, Friday, afternoon.  Somehow some fiddling was done with cables by T****** and my access was cut.  A ring at security door yesterday afternoon announced a technician .  I thought he'd come upstairs but apparently he could investigate without coming up. So everything's back and running..

A couple of weeks ago I did a plain hat in grey alpaca for #1 son.  I made him a similar hat in black some years ago and it's had a lot of use.  It's looking somewhat tatty.  So I made a second for him in Bendigo alpaca in grey.  I couldn't remember how many stitches I had used and made this one a trifle large.  No problem. DIL took it and turned it into something slouchy for her.  She loves hats and looks good in  pretty well any style. 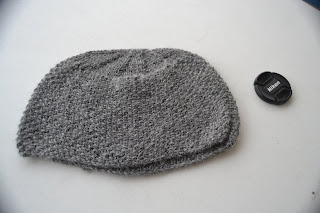 So that left son still needing a hat.  Bendigo alpaca again  and fifteen stitches fewer than the previous hat.  He hasn't tried this one on yet as DIL has been away and he's still on crutches. He has another  three weeks in plaster and then even more physio than he is currently having.   However, it's considerably smaller.  Very basic design.  My sons like the skull cap effect and I do a big band of moss stitch and then decrease in stocking stitch.  Apart  from  getting the number of stitches right, it's easy.  They find the style comfortable and warm even though they don't look wonderful when photographed. 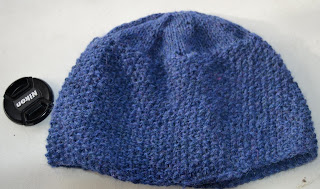 #2 son decided he would like one too.  Bendigo alpaca again, this time the blue called Britannia.  Eighty stitches all around as his head is the smallest of the three of them.  This one is fresh off the needles a few minutes ago and hasn't been blocked yet.

I seem to have  a talent for getting lens cap in the photo. I think I put it there so it's obvious when I finish  and can replace it easily.  My head is very light headed at the  moment .  I came down with a nasty cold yesterday and rally don't feel wonderful at all.  With  the weather as cold as it has bee lately, I don't think I'll be going to church tomorrow in the cold air.  Who wants someone who is sneezing 8-12 times in succession ? 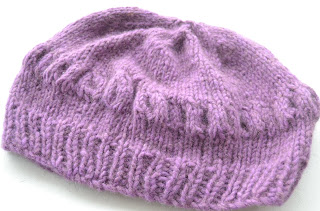 And now for something a bit different.  Still a hat, the fourth in the last two weeks.  This is for my friend in Christchurch NZ and I'll send it with the Patonyle cowl I did last week. There is a row of what could be called medallions around the hat.  It's super warm as she will need but it's a bit of a case of coals to Newcastle.  The yarn is Naturally NZ possum/merino mix and the label called it 10 ply.  It's done on 4.5 needles and is fine as a hat but I would go up a couple of sizes for any other garment.

You know why I like knitting hats? They're quick, they're easy, there's minimum sewing afterwards and I don't have to make a second one to match!

I wish we could get Older Grandson (17 months tomorrow) to wear a hat but he can't stand anything on his head.

I thought the lens cap was there for comparison purposes!!!! Great hats they look like men's hats!! I hope your cold goes away, and you feel well. Glad your internet was fixed. I had problems with my phone, and a few weeks later I found that the lines were being 'upgraded'. Not really!!!