Herewith a congregation of alligators.  At least that's what wikipedia and other sites tell me is the collective name for a group of alligators.  These are done for a friend who is making a memorial banner for another internet friend who had the nickname of alligator.  The pattern is cute but not well written.  The largest was the first one I did and I've gradually adapted the pattern making changes to suit me till I finally tweaked it to my liking.  Three were other bits which were awkward as well and I decreased stitches across shoulders of the beast to make it in proportions more plesng to me.

Some I did in i-cord, rather knitting six stitches in the round on three needles!  The feet pattern was also awkward and not very attractive. 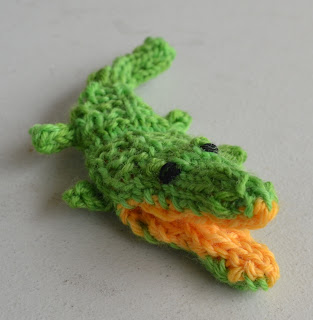 I've used mostly sock wool, much of it just scrappy odds and ends I had.  A lot of it was Patonyle, although the yellow was a little left from socks made in yarn from Needlefood in NZ, no longer in business.

The animal was supposed to be stuffed but it's going on a banner and already three dimensional.  Ends of wool have been stuffed down inside the body to give a bit of bulk.  It' can be flattened or rounded to suit, however my friend wants it.

The smallest crocodile is for my friend's grandson who is known as "croc."  She suggested her mother would put it on a baby hat to keep his head warm.  Her choice to do whatever she wants.

When I looked up the  collective noun for a group of alligators, I also looked it up for crocodiles.  There's a choice for them.  A group  can be a congregation or a float or a bask.
Posted by Jan at 12:39 pm

So many toothed amphibious reptiles!! I love that they can be a bask. I think of them basking, ominously, in the still water. They are so cute and I know they will look fabulous on a banner or a hat.

Basking is bad enough, floating - eww! I saw the crocodiles being fed (in the wild) on the Adelaide River outside Darwin - I don't like them at all! Funny thing is, they don't really congregate at all!

You have done a lovely job tweaking and getting them 'just right'. Where will the banner be kept when it is finished?

I like tha idea of a bask of crocs ... seems almost benign [ which we know thay are not ]
your gators are very cute, which seems oxymoronic, but there you are.