smoke gets in your eyes 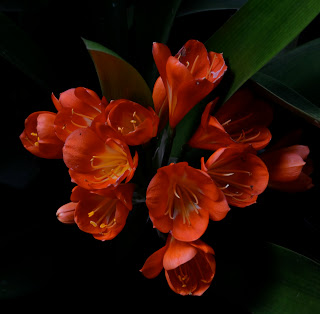 I've been having fun  with my now not-so-new camera.  I've learnt a lot and have, mostly enjoyed the challenge.  The other day I decided to bite the bullet and try the manual setting.  I found this very daunting but at least I'm not paying to have mistakes developed, I just wipe them from the camera. I wandered around the building taking shots of all sorts of things.  Some worked, some didn't.  I was surprised that one I took of the controls in the lift turned out.  The lift has shiny plywood or similar walls, the control is shiny steel and overhead is a vicious fluorescent tube.  Lots of light sources  to deal with but I managed.  Probably more beginner's luck than good management.

I really like this particular one of a clivea  near the front security door.  The colour is fairly true and I like the concentration on the details of the flowers.

Last Saturday we had a family birthday lunch at son's on central coast.  There are several of us who have birthdays from late July to early September, so we decided  combined lunch was the way to go.  As it happened, my birthday was actually last Saturday so it was a good choice.  I went up the day before and stayed overnight.  DIL is a hairdresser and did my hair with loads of blonde foils.  Totally different from normal, quite striking but something else I really like.

Beautiful day but freezing.  Son wore heavy jacket and an alpaca beanie I had knitted while doing the BBQ. The wind was cold but all the cousins ran around madly and jumped on the trampoline and so on.  They hadn't seen each other for a while, so they really enjoyed themselves and there were no accidents and scraped knees etc. 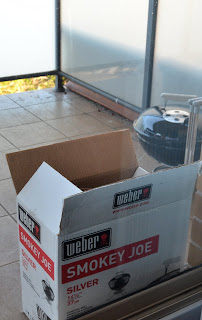 Some time after lunch, there were cupcakes and candles and a gluten free cake, also with candles.  Then I had a surprise.  DIL presented me with a large box wrapped in brown paper and a purple gift bag to go with the box.  A Smokey Joe small Weber BBQ for me, along with firestarters and heat beads.  I've been missing grills and using the stove here often results in the smoke alarm being set off.  It's not in the kitchen but seems super sensitive to the slightest fumes.

We had a fire inspection here a week ago of fire alarm, door closer and condition of front door which is a fire door .  The chap who did it said everyone complains about the alarm's sensitivity to cooking.  Better safe than sorry, I suppose, but I turn fan onto high and open a door if I grill or dry fry food.  That's a bit much in cold weather.

So now I can cook on the BBQ and close the vents when finished.  That will put out the heat beads and they can be relit another time if unused.

I was coming back in the train, so left the BBQ for #1 son to bring back in their car.  He's vastly improved although he still gets pain, but he's off crutches and his little bike/scooter.  However, while they live ten minutes from here by car, their car has only two seats.  It's a little Citroen Berlingo van.  There have been short drives when he has sat in the back, well down out of sight but I wouldn't et him do that now.  So I came home by train.

I've rearranged kitchen a bit and moved microwave down to bench.  I don't like it there, but it's much more convenient and certainly safer for getting hot stuff out of it. 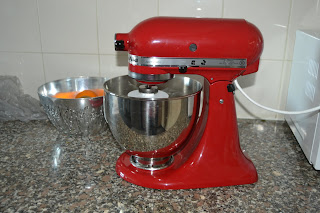 So look  what has moved in and taken up residence.  I left my Kenwood behind when I moved out several years ago.  My second Kenwood, actually.  I've been using  a small handheld mixer which I bought when we had a place in the bush outside Cessnock.  It came from Woolworths when they had long counters down the shop and lots of shop assistants and cost $14.  I'm not joking.  We sold that property in 1985. It's getting very tired and I think I may need to be merciful to it before it burns out the motor and throws the circuit breakers here.

Kenwoods such as I had are now about $1500.  I nearly choked when I saw the price although I think my first one was $300 a very long time ago.  There is an unattractive smaller model which I didn't like and that was over $800.  This comes with a DVD for instructions and a CD-ROM of recipes. 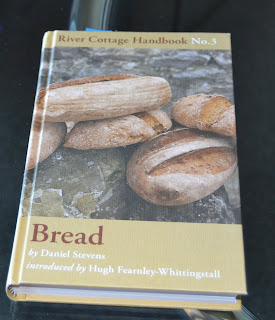 I saw a recommendation for this book on another blog, although I can't remember which one.  I've made bread since I was at primary school and started  with decent hot cross buns.  I have several bread books but this is certainly one of the best.  It was under AUD$20 and I bought it from the Book Depository.  It has a large introductory section on the theory behind what the author does and why.  It's easy to read, although the print could be bigger and the print of the index is almost unacceptably small.  There are lots of recipes and an easy starter for sourdough.  Flat breads and celebratory breads are included.

The author has a horror of throwing out bread, so there also recipes and ideas for using stale bread.

SO I'm making bagels.  I have  forgotten to take photos but may take some of the finished product if I'm satisfied with the way they look.

And knitting?  Well, not much to be honest.  I'm going to frog the shawl that I started.  It's really not suitable wool for the purpose although I love the colour.  I've done a bit on the sock but my hands have been sore and I jabbed the end of middle right finger and it's also sore.
Posted by Jan at 5:12 pm

Happy birthday! I love my red kitchen aid, I'm sure you will be very happy with yours!

Happy Birthday and what a great and thoughtful gift from your family!! And the red Kitchen Aid looks so fantastic too. You are doing so well with your own pictures too.
Glad your son is recovering well and how nice to see your knitted items being worn!!

DD asked if we would buy her a Sunbeam Mixmaster - I was bowled over by the price (and she didn't get one).

I think I would have moved the microwave down too - I don't even like lifting things down from my wall oven!

I have never successfully made bead - it always tastes yeast-y! And I really don't like sourdough!