Most of my cotton stash, some very nice stuff has gone.  Emptied by garbage men this morning.  Yesterday I had a delivery bought online from Woolies.  I've been glad of online shopping since I broke toe and have been sick for three weeks now.  I'm glad to say that I think that's behind me now.

I also get a box of fruit and vegetables taken straight into my kitchen, another online purchase.  It reminds me of the grocer delivering to mum when I was young.  No online ordering then, though.

So I unpacked it all straight away and put it into my pantry/store room.  I opened the door to that room late in the afternoon to get some ingredient for dinner.  There was a strange smell in there, a bit like Worcestershire sauce.  I checked all my sauces and condiments which sit in a tray with an edge all round.  Nothing there.  Picked up a few packets that I had put there in the  morning.  Nothing.  Then I heard a couple of drips.

There had been a bottle of raspberry vinegar with a looseish lid that had survived two house moves. Somehow it had been knocked over and the vinegar was slowly dripping down through the shelving.  On the floor under the shelves was a plastic tote, open, as the lid had broken.  It had a great pile of cotton in it and my possum/merino wool.  Most of the cotton was soaked, it must have been dripping for a while.  Some of the possum was wet.  I pulled it all out and decided to throw any thing affected.  I don't think I would have got it clean and washing would have been difficult. So out it went.  There was about a cup of raspberry vinegar on the bottom of the tote as well.  A couple of small pieces of cross stitch were also soak, so they went out too.  What a waste. 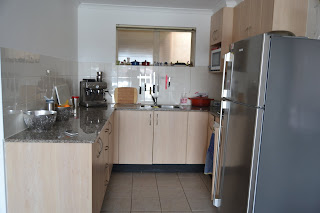 I've been here almost five months now and am gradually thinking about what I can do in the kitchen.  The rest of the place, including the bathroom is fine, looks like new, but the kitchen is tired and not well planned really.  It's small, very small, about 2.5 metres either way.  That's wall to wall, not the space in the middle. 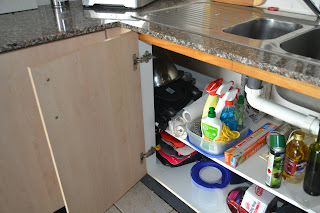 The cupboards are mostly too high for me, the exhaust fan vents straight back into the kitchen and activtes the smoke alarm in hall outside.  The cupboard under the sink needs remaking. It doesn't have a hinged corner door so the space in the corner is almost impossible to access and is really wasted.  The shelf needs more support than it has and there is a bow in it. 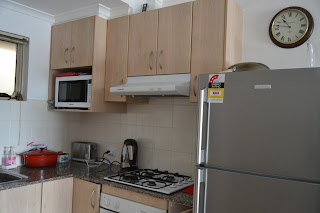 These cupboards are quite high and the microwave is difficult to use at an odd angle. 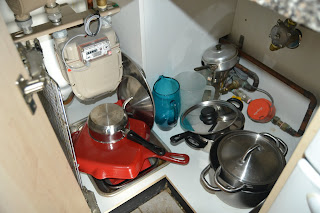 There is a corner door here for easy access but look at all the gas and water bits and pieces. 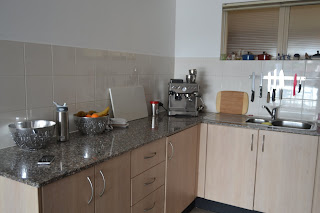 The drawers here look OK but are falling apart inside and need new bases.

I called in at a kitchen place near here today.  I liked a lot of what they have but the woman was reluctant to tell me unit prices.  Their kitchens start at $10,000, she said.  I want to have something I like that is well planned and useful.  I don't want shoddy stuff but neither am i going to pay enormous amounts for it.  One possibility is getting someone to replace the doors with something more to my liking and fixing the coupe of major problems with the cupboards.

I'm thinking of some glass shelving down the all on this left hand side for cups etc.  I don't want cupboards as it would close in the area too much.  I need to do something with the lighting.  At the moment the light has been placed in ceiling in middle of the space.  That means that I cast a shadow and work in that shadow, no matter what bench I am at.  Floor tiling is fine and I would really like a glass splashback.  The bench is OK but I would not have chosen it.  It's in good condition.

A flat pack kitchen and a handyman sounds like the go!

Do you have a Bunnings warehouse nearby? They do flat pack kitchens at a reasonable price. So do Nobby's. Ikea is at Rhodes but will soon open at Tempe (on the Princes Hwy, closer to Sydenham station than Tempe). Even if you don't buy one of their kitchens, you will get some good ideas!

My friend recently installed a new kitchen - it's nearly all drawers rather than cupboards - gives her great access right to the back because it comes to you!

Forgot to say I was sorry to read about about the waste of your yarn and cross-stitches.

You poor thing, your toes and being sick and then a terrible yarn accident. What a shame. That kind of thing happens to me too.
Drawers are the go, I have three big drawers and I wish I had more, they are about a third of the height of the door each, but small, medium and large.
Hope you feel cheerier soon.

What rotten luck about your yarn. You could have wound it into skeins and washed it, I suppose, but it would have been a lot of work.

I have had an IKEA kitchen, and it was great. Very good quality, and Lynne's right - even if you don't buy one they are full of good ideas. It was delivered very efficiently, and they gave me the name of someone who removed the old kitchen and arranged for it to be taken away then installed the new one, all in one day, and at a very reasonable cost.

Good work on this post! I really like the way you delivered your qualitative facts and how you made this fascinating and effortless to realize. Thank you!! cuddly home advisors