It's been a few days and I'm sick of sorting books so opened up Blogger to see their new interface.  Have seen comments but this is the first go with it.  I daresay I'll figure it out.

Knitting?  I went all  week and knitted one  row only on a sock and nothing else.  I'm using some of Ailsa's sport weight merino in Amethyst.  However,  one row was all I did. 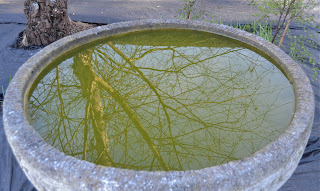 Last weekend I was in Mittagong on our annual gathering with friends.  It was beautiful and a much needed break away. Friday was grey and chilly but the rest of the weekend was beautiful.  Very clear blue skies and lots of sun.   Saturday was very cold, ice on the windscreen at 9:00am sort of cold.  Cold all day too, although clear.  Sunday was  much milder and still  sunny.  Friend and I stayed in the motel we always go to.  It's not the most luxurious but rooms are perfectly adequate when all we really need is a bed and bathroom.  It's very clean and beds are comfortable.  There's heating, electric blankets for those that  like them and it's close to town centre.  When we first started there some years ago, rooms were $60.  They are now $85 but for once a year that's still OK and certainly cheaper than almost anywhere else down there.

The picture shows a sandstone bowl at the motel reflecting winter-bare branches of the tree above it.  It was  taken early one morning before we went out for  breakfast.

The whole area is bursting with signs of spring.  Blossom and bulbs are everywhere although the tulip beds in the parks are still securely covered to stop predators of all sorts from spoiling them before the Bowral Tulip festival.

Friend and I drove around sightseeing on Friday afternoon. We found a winery, Centennial Winery, not far out of Bowral and decided to visit.  It's also a cattle property and just oozed money and care.  Huge bulls, Limousin I think, lazed under very old trees.  The driveway was was lined with trees and each of those was surrounded by probably fifty daffodils, all blooming.  The place was well set out, there was a cafe and restaurant but we didn't go in there.  They hold functions and receptions there and it would be perfect for photos.  It's set on a rise and the gardens are terraced and hedged with low plants and everywhere  there were more bulbs blooming.  Service in the tasting are was attentive and informative without being pushy at all.  My friend bought a couple of bottles of wine and I bought some rhubarb and ginger jam, locally made.  It's very good.  I also bought some locally produced raspberry vinegar to replace what spilt into my yarn a couple of weeks ago.

This is part of St Stephen's Anglican church, built about 1880. It reminds me very much of the church I went to in my childhood, about the same age  and size.  An extension has been built to this at far end of church of stone which almost exactly matches the old stone in colour.  It's been well planned and integrated with the  church building and it's a useful addition to the facilities of the small town as it is well fitted out and has a new commercial kitchen.  There's another parking area the other side of the church at the front and two years ago we watched as the well polished prime mover of a semi manoeuvred its way in their for a  wedding.  It held the bride who had to be carefully helped down four steps from the high cab. 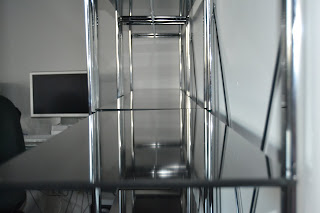 I have spent a lot of time this week sorting books and populating  my shelves.  It's been lovely to collect knitting stuff in one spot again and my cooking books too. I have thrown a lot out into the recycling.  They are not books that others would want, they've been packed 3 1/2 years and I've never even thought of them.  Probably hadn't thought of them for twenty years before that either.  I probably should not have packed them all up when i left.  DIL and I were in a hurry to pack a van and get away and I don't think that emotionally or psychologically I was in a place to even think about discarding some. 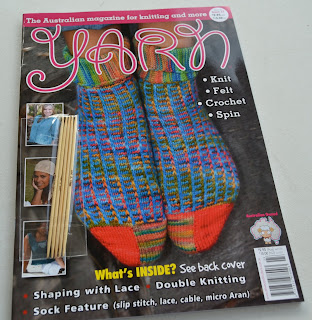 This was in my letterbox yesterday and I was glad to see it.  Also glad to see the needles.  They are short 2.75 which I had been trying to find for Ailsa's sport yarn.  I'd done the ribbing on a cobbled together set.  Last night I switched ribbing over to the new needles, undid  the one row I had knitted during the week and set off again.  Donyale's pattern for mismatched socks with ribs, cables etc is in this issue.

I have now done about 50 rows of simple knitting on those socks.  It was fairly mindless, what I needed last night.  I was feeling blah and flat.  The distribution of Mum's estate  was finalised yesterday and it took probably 90 seconds  to be handed my share of the estate.  We didn't even get to see the solicitor but had cheques handed to us at desk.  Both my sister and I just felt that the end did not seem fitting to us, although I suppose that really did  not concern the lawyer.  I felt quite down for the rest of the day even after banking the cheque.  Money is definitely not everything.
Posted by Jan at 3:54 pm

No, indeed; money is not! I'm sorry that it came to that.

Hope you are soon feeling better.

Oh, you must feel a bit down in the dumps, the lawyer needs better interpersonal skills. Money is not everything, is it??
Your trip away sounds wonderful, and full of exciting things. The sandstone bowl photo is beautiful!!
I hope you feel like knitting again soon.

Money isn't everything. Keep doing what you love! You are very talented.