MIL's funeral is over and could have been both better and worse.  It was a very long day for me.  I left here just after 7:00 am to get to Strathfield Station where I was to meet son from Central Coast. His train left his home station before 7:00 and he's definitely not a morning person.  Buses on the route to the station are very unreliable.  There are two routes, each supposedly coming twenty minutes apart, so there should be a bus every ten minutes.  I have waited 35 minutes and then caught one of three arriving together, all the same route number.  Most unreliable and I could not afford to be late. Another son picked us up at Westmead and we went to cemetery where burial was at 9:30 am. 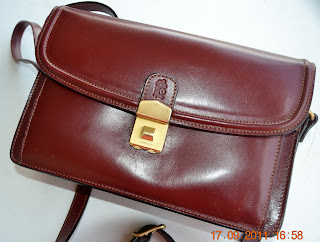 This son was very tired.  He had found where his father lived just by accident and had offered help.  He'd been busy making a slideshow to show after ceremony and scanning dozens of old photos.  He'd hosed down  lot of brushfires with his dad, done  an order of service and diplomatically managed  to persuade his father that the funeral was not about him but his mother.  This influenced music,  what happened and other things.

There were about 40 people there which surprised me.  I had thought there may have been twenty.  Some were those I would have called friends, one I had known for over forty years.  I was soundly snubbed by them.  I knew it was likely to happen but had hoped they would rise above such pettiness.  A local pastor spoke for quite a while and the coffin was lowered.  The winding mechanism to lower it needed attention and as the coffin went lower, it squeaked ever more loudly.  People looked this way and that and up in the air.  We all tried to pay no attention to the noise but it really was unavoidable.  She was not a big woman, so it was not as if there was extra stress on the mechanism.

After a cup of coffee at McDs we made our way back to the church which was in an industrial area at Glendenning, one of many newish suburbs around there.  Thankfully it was air conditioned s it was very hot.

Son who had picked us up played the keyboard.  Each son spoke briefly and well and eldest grandson read the 23rd Psalm.  Also well.  Then ex-husband gave the eulogy, really not much more than a chronological account of her life.  He made many mistakes as to dates even putting our wedding date some years out.  He dropped a big bombshell at the end, which I can't really say anything about here.  It won't affect me but will definitely affect the boys.   He says it's legal, but my solicitor brother doubts it vey much.  Pastor spoke again and said much as he had already done but took three times longer to say it.  Either there were aspects of her life he didn't know about or he was gilding the lily.  Her life was really nothing at all like he made out.  Just nothing like it. Everybody from the family who was  there recognised it and mentioned it, so it wasn't just me. 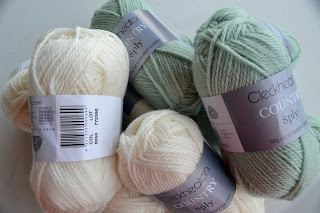 There was a light luncheon and more snubbing, this time from my husband's former pastor.  We finally got away and went to the club near son's place.  They thought this was fitting as MIL spent probably 90% of her time at the club.  We actually sat in the cool and watched the lawn bowls and talked more than anything.  I arrived home twelve hours after leaving.

I bought the bag shown above to match the new shoes bought earlier.  It came from the Strand Arcade in the city and is a deep burgundy.  It feels and smells wonderful and will probably last just about forever.  The leather is good and the craftsmanship is superb.  I was  surprised at my reaction to the funeral.  I was knocked for six at the weekend.  Didn't sleep and felt really bad.  I'm sure this was due to the bombshell I mentioned, the snubbing and the emotional situation all day which had nothing really to do with MIL's death.  I'm beginning to feel a bit better  now. 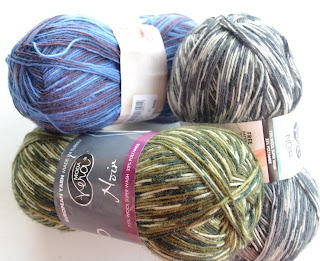 I went to Spitlite at Birkenhead Point on Saturday to their latest sale.  I've noticed  that they have had probably four big sales in the last couple of months.  I'm almost expecting to see a  final sale.  I bought some Cleckheaton Country to make a Catkin shawl (Ravelry link).  I've done just on forty rows of it.  Also bought, against my better judgment, some Moda Noir sock wool.  The green yarn is less olive green and more grass green than shows here.  I was not happy with the dyeing of the ball I used earlier for a shawl.  There were lengthy sections of white yarn with no dye in them.  I hope this lot is better.  All the wool shown in the picture came to just over $35.  The Cleckheaton Country is 8 ply and I think I'll return this morning and get a bit more.

Sorry to hear that things did not go well for you after the funeral. I hope you are soon feeling better and can put it all behind you.

I have almost two archive boxes of Moda Vera sock yarn - the dyeing is not always perfect but at that price it's perfect for my purposes. I bought twenty balls of MV Marvel for mum - $2.10 is so much better than her local department store which charges $7.00 for Panda Magnum!

Yes, I'm sorry to read about the way some people behaved. It is especially inappropriate since it was a funeral, and people should at least try to get on. No wonder you were exhausted, but it was a good thing that you went, and such a nice handbag too. Not much on sale here at The BlackSpot of Doomlight at all. Glad you got some bargains!!