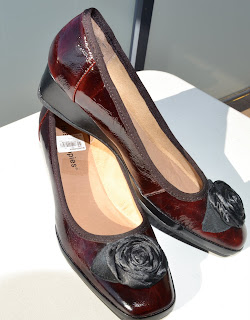 I really have no need for dressy shoes at all.  Smart shoes, a bit.  However, the one pair of dress shoes that I do have won't go with clothes  suitable for this time of year so I went shopping today. These are deep burgundy with a burnishing of dark blue which is hard to see in the photo.  The wedge is a bit bigger than it seems from the photo but not high. I no longer do high heels and live in boots or flats.   And even better, they were $40 cheaper than the price marked on them, although there was no notice of a sale in DJs.

So why the need?  My ex- MIL died just on 24 hours ago.  It was not unexpected.  She had diabetes related gangrene in both feet and an operation for amputation would not have been survived.  She has had dementia for some years and has never looked after herself.  Poor diet, no attention paid to health even after the diabetes was diagnosed.  A heavy smoker and drinker most of her life till the last few years and absolutely no exercise at all.

The funeral will probably be on Friday.  I don't want to  go at all and hadn't planned on going.  However, each son has separately said they would appreciate my being there.  I think they are not sure how their father will act.  He can be very strange at times and we all suspect he's bipolar.  So I think that while not definitely asking me, that's what they really are doing.

She has never liked me and has always been rude to me.  One birthday present was a club bingo prize she had won - a packet of flour, a bottle of sauce and some laundry detergent.  To this she added a washed but stained teatowel with lots of holes.  She had a nasty, vindictive personality.  You may think I am exaggerating.  Several times in the last few years she has been in hospital.  She caused chaos every time as people in beds near hers insisted on being  moved elsewhere.

So I'm going to the funeral wherever that may be.  I'm going to dress up, put some jewellery on and show that I have moved on.  My ex-husband won't notice, he never paid attention to things like that.  But, as one son said, others there will see and get the message.  He's not popular with some of his family either and some have told me quite startling things he had said or done before I left, which I had no idea of.  I know this is a fairly shallow thought but right at the moment I feel flat and unenthusiastic about anything.  Right now, it's a coping mechanism.

* Dr Seuss was never one of my favourite children's authors, I avoided his books usually even with my sons, and I seem to remember the actual quote was about fish.  However, this phrase stuck in my mind.

Nice shoes. I'll be thinking of you and yours this week. May the funeral be another significant step on the path to healing and wholeness for you and the extended family.

I know it will be difficult for you but go in the grace of God; He will be right there beside you all the way, maybe He will even carry you.

As for Doctor Seuss, I preferred his books for older children: Grinch, Horton and my favourite: The 500 Hats of Bartholomew Cubbins.

They are lovely shoes. I hope that you have many happier opportunities to wear them in the future.

I love your new shoes, they are fabulous!! I a sorry to read that they were bought because of your ex MIL's death. I hope that everything goes well at the funeral. I don;t really like Dr Seuss either, never read him as a child and haven't really liked his books enough to gift them to friends' children. Yes, it is fish!!

My ex is Bipolar. You go and do it for your kids. They need your support and stability. Bless you.

By the time you read this it will be all over. I hope your children appreciated that you were going there for them, and that you stood proud and strong in your new shoes.

You might think the ex never noticed when you looked nice, but I bet he did today.