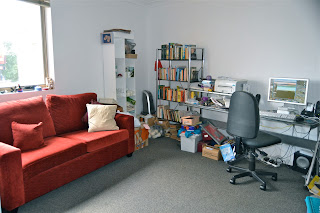 Another reason for little knitting has been the unpacking and sorting of my spare bedroom.  The mess was really getting to me.  It was a mammoth job and I would have appreciated DIL's help.  She's very good at this sort of thing and having someone to talk to is a help too.  I've just vacuumed the floor in this room and feel much better being able to see the floor!

The room is basically done now.  At least what I can do.  The blind is not easy to use and the one in my bedroom is also partly broken.  That will be next on my list.  I can't fix them myself.  I have some boxes of yarn on the floor still.  I intend to do a major clean up of yarn.  Some books are still sitting on top of books in shelving.  Desk is a disgraceful mess and there is some filing to do.  That won't take me long.  It's just making myself do it.  I still have a few broken up boxes to take downstairs but nothing like the number from when unpacking books. 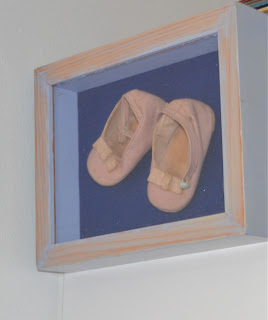 I've also been unpacking stuff from mum.  Some photos are in previous post.  I described this to a friend as somewhat melancholic.  He understood what I meant because on the same day he'd been going through some of his dad's stuff.  Melancholy is not a bad thing at times.  It produced some  reflection and opened up areas which I have kept tightly closed for a long time.  A good thing perhaps.

I did not even know Mum still had these.  Mine.  Rather sweet, I think.  I think  my sister must have had them framed when Mum was in the nursing home.  They have mum's name and room number written on the back.  My small granddaughters were very taken with them.  One is a pink girl and the other likes purple but will take pink too.

Speaking of framing, I found five, originally four, woollen tapestries from my dad.  The workmanship is fine although he was not skilled at  tapestry.  He used to do it on  a standing wooden frame.  My brother does  it tapestry too.  I decided I wanted to frame a couple and give to my brother and sister at Christmas.  Then I found that the people who used to be nearby who did quite good blocking and framing are no longer there. So I did a search and didn't find much anywhere close at all.

I did find one place at the end of one trainline sort of close to where Lynne from Never too Hot to Stitch lives.  Not close as would be thought of in inner-west but I know from my sister who lived many years fairly close that even 40 minutes drive  in places like that is regarded as local.

I emailed Lynne to ask if she knew anything of this place.  Then came a lovely surprise.  She lives close to the other trainline.  She offered to pick me up at the station and take me to where she has had cross stitch framed in the past.  She's very happy with the jobs she's had done there, but it's a bit awkward to get to from the station.  Then we would have  coffee or lunch.  Lovely.  She and I have had an email correspondence for a  while but have never met.  Just lovely.  I'm looking forward to it. 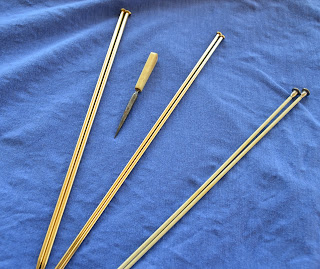 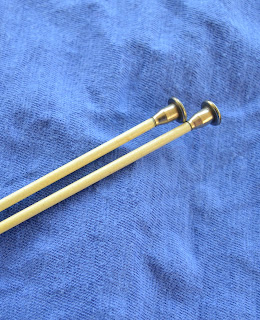 Mum wasn't a knitter.  In fact, she hated handwork of any sort.  When I was a child, my dad made my clothes and mum reluctantly sewed buttons and hems.  A knitted jumper started for me was finished by one grandmother eight years later for my sister.  She did start to knit later in life as therapy for very bad arthritis in her hands.  However she did only beanies and some scarves.  I was surprised to find two knitting bags, one I made for her and the other plastic quilted.  There were odds and ends of wool but I threw out most of that  as it was moth eaten.  To my surprise, there were several dozen needles.  They didn't come from her mum  who was a crocheter who hated knitting.  Some she'd bought herself, I recognised the brand and there was pack of Beehive needles, possibly 6 mm, still in a wrapper marked 0.88 cents.  There were loads and loads of heavy steel dpns, most extremely rusted and corroded.  However I found these in the picture too.  A small tool with ivory handle.  The two pairs of needles on the left are hard to recognise.  They are quite rigid with almost no flexibility.  Metal and quite golden in colour.  The pair on the left are lovely but I won't be knitting with them.  Possibly and old fashioned size 12 or 13.  They look like ivory but aren't.  Strong again and unbending.  I think they are metal with a coating on them.  Some of the coating on the point of one has chipped off, it's hard, leaving a super sharp point which would be too painful on my fingers to use.  They would soon be raw.   What I really liked however was the silver cap.  It is silver and each end has been engraved in a pretty swirly pattern.  No size marked or any other identification given. 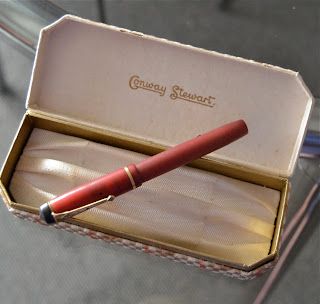 And finally one more picture.  Mum's fountain pen which needs attention.  I've been admiring pens lately but don't think I'll get this fixed.  It's very light.  I like pens to be not necessarily chunky but solid and heavy in my hand.  I usually put the cap on the end when I am writing with such a pen to make it heavier and to provide some balance in my hands.  There was probably a pencil with this, but I don't  remember ever seeing it. It's quite a pretty little pen but the lever used in filling it has corroded and is very stiff to use.

Yes,a little melancholy is not a bad thing and it does lead to some interesting reflections. What lovely surprises you found, and how lovely that you will be able to meet your friend!!
Your room is looking very good, you are So Very Organised!!

Purrowled in to find out a little more about you.Thankyou for leaving that comment on my blog!

I, too, am looking forward to finally meeting you.

A little melancholy is not altogether bad; how can one be anything else when dealing with the belongings of a beloved parent?