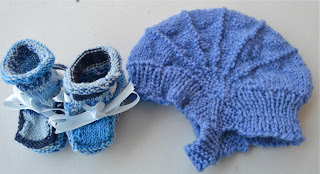 Baby steps right now for babies.  I did the booties a while ago.  They are a fun easy pattern to knit.  However, I've only just bought some ribbon for them.  The hat is the free pattern from Jussi, called Aviatrix.  It's an easy pattern too.  This is newborn size and I completed it all bar one strap in an evening.  My fingers began to ache or that would have been finished too.  Now I just need an address to send them to in Canada.

Jussi's pattern is lovely to use.  It covers a multitude of sizes and  about four different weights of wool too.  It's well set out and easy to follow.  The hat relies on short rows for shaping.

I think I have just about everything sorted now and have got rid of all the bulky rubbish.  I would normally be at church now but am at home.  I went downstairs to front entrance here to find the inside door handle of the security lock on the floor.  I have no idea how that happened but I think it will need a visit from an emergency licensed locksmith to fix.  Only licensed locksmiths who are registered with police can deal with those locks or the keys for them.

There's a door on the other side of the building but that involved a much longer walk around to the front and then across road to bus stop.  I found it hard  to believe but the bus was early.  I'm used to late, up to fifteen minutes, although I don't rely on that fact, but early?

My son and three grandchildren were here for dinner last night.   He's been miserable and his wife was on a compulsory SES training weekend.  I suggested I'd mind the girls while he and his son went to movies.  I'd been on Friday with a friend to see Johnny English Reborn.  Not what you'd call a great movie in many senses, but friend and I had a good laugh all through and found it a good stress relief. No bad language or nasty scenes for a 12 year old, but lots of action  and chases.  He enjoyed it.

Son enjoyed it too but I was  concerned.  He has a nasty head injury.  He was mugged in the city and hit hard over head  with the axle side of a skateboard.  Middle of last week.  He was on Panadeine forte but his own doctor prescribed another much stronger pain killer as the codeine can raise pressure inside skull and it's sore enough already without adding to it.   We were  fortunate that the injury was not worse, it could easily have been.  Also thankful that the mugger was interrupted by someone coming into the toilet area  where it happened.  Son lost wedding bands, designed by him and made specially, his watch and his work phone.  Another minute or so  and more would have gone.
Posted by Jan at 11:21 am

I wanted to knit that hat for my Older Grandson but he will not wear anything on his head -- which is a problem now that the days are getting longer and warmer and he is very fair and wants to be outside all the time!

That's awful about your son! I's so glad that he's ok.

Your poor son, that's just awful. I hope he feels better soon.
I love the Aviatrix hat, I've made a few and I love all the options. So pretty with the booties.

Yes awful about your son, he would be quite traumatised. Hope he feels better both physically and mentally soon. I too enjoyed making the Aviatrix hat