I've been busy for some time unpacking books and shelving them and am up to unpacking some of the stuff my sister sent down after  she had gone through mum's stuff.  I'm sorry to say that some of it  I haven't seen before, some I have no sentimental attachement to.  I wonder if passing it on was all she could do herself at the time.  Now I have to get rid of quite a bit.

So there hasn't been much knitting.  I haven't had a lot of time to spare and constant unpacking heavy books and throwing out bags of rubbish strained my right wrist, so little knitting.  I'm up to the colour change, doing the middle section of Catkin shawl but haven't touched it for the best part of a week.  I think I'll make myself a drink when finished here and peruse the next section of pattern carefully.  When I printed it out, I had a quick glance and found it confusing, but I was tired at the time and would go no further.  Perhaps I've learnt that lesson finally. 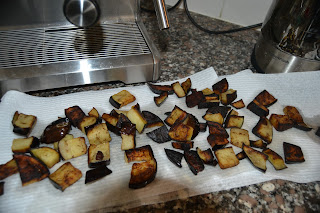 I have a box of vegetables delivered.  This saves me having to cart heavy stuff home in the bus.  It's not cheap but everything is of very good quality and the box is delivered by a cheery fellow who puts it on my kitchen bench.  It's probably fairly close to what I would spend anyway.  I really get a small box of vegetables which has some fruit in it and for $10 extra, I get a boost of extra fruit.  Organic eggs, good oils and cheese, pasta and bread are some of the extras available too.

The box before my latest delivery had eggplant on the list.  I really like eggplant.  It was missing, so I rang the business, thinking it may have been an oversight.  No, not an oversight.  He didn't consider the quality at the markets to be up to his standard and had substituted other things.  However, he made a note and this time around there was a really beautiful one in the box, although it wasn't listed as a general ingredient for the week.

This is the start of eggplant salad.  Chopped eggplant, fried in oil and draining on paper. 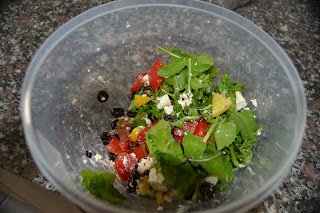 Into a bowl went some peppery rocket, some cumin seeds, chopped tomato, and some of the Bulgarian sheep's milk cheese which is the nicest in my opinion.  A small box, the one with the green stripe around the lid and the name Kebia.  Add in some chopped black olives and some shredded preserved lemon.  I used what I had preserved a few weeks ago.  I tasted a piece last week and ate a whole piece which I enjoyed, although rinsing would have removed some of the extra salt on it.  As you can see, I haven't been too fussy about getting rid of the lemon flesh.  I enjoy it and will eat it. 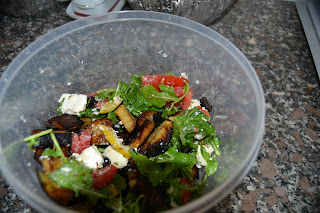 Add in drained and cooled eggplant and here's the  finished article with a little extra lemon juice added.  I think I'll have some of this with a piece of steamed fish for dinner tonight.  The lemony flavours should work well with the fish.


It's hard to make  food for just one person, but I'm gradually getting a balance.  I don't mind leftovers, but I don't want huge amounts of them and I'd like to be able to freeze some, rather than eating the same food for several days. 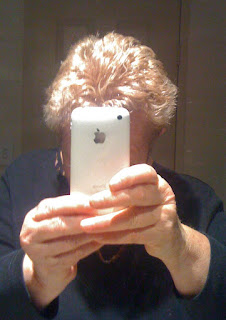 I spent some of last Friday and the weekend up the Central Coast with youngest son and his family.  His wife is an expert hairdresser and does my hair.  I pay her, but it's a better job and cheaper than chancing a salon around here.  I trust her judgment but asked her a while ago about another  colour as I seemed  to be getting more grey!  Unheard of at my early age!!  Not really.

She said there was still too much colour in brows and general complexion but has now decided it's time.  For my birthday she put in lots of blonde foils.  I've had loads of compliments about it so she's repeated it.  While I was never truly blonde, I was not dark brunette  either.  This suits me and actually has made me look years younger.  I've not been really well for about three months, not really sick, but not right.  It's taken a toll and this colour has given me a lift.  I still look twice when I see myself in the mirror.  It's different but in a good way.

Youngest grandchild was amusing.  He'd been in the bush earlier in the week and picked  up a tick somehow.  It had lodged over his spine and my son took him to the doctor to get it out as it was very firmly embedded.  He proudly showed me the little critter which the doctor had given him in a specimen jar. There were no problems and it's healed well.

He also asked me if I would like to hear his SPEECH.  His emphasis.  As he had speech therapy for a year before he started school, this was to be encouraged.  He's also shy, so it was confidence building for him.  He had fourteen pieces of paper, numbered  and in order.  All  about his old cat and the two new kittens.  Apparently it went down well with his classmates and he was happy.  He stood up and basically read from his cue cards, accompanied by a few giggles.  School and speech therapy have been good for him.  Now he can make himself understood, he's not frustrated any more.

i adore eggplant! It really divides people doesn't it? I could just fry it and eat those lovely dark, silky pieces alone. But a salad sounds marvellous. I've never tried one and really must.

i don't think it's unreasonable to have little attachment to some items you've never seen. I think as long as you honour the ones that are meaningful to you, then you're doing ok.

Bells is right, I have had good eggplant (rarely) and bad eggplant. I never had it when I was small and so I don't think of it as something I would buy. Your salad looks fabulous. That, I would buy!!
Nice hair, very attractive!!
Don't knit something complicated when you're not 100%. I do hope you are feeling well soon.
I should not give any advice about sorting things out, I am hopeless and like to keep everything. It's probably a blessing you have limited space, it will inform your decision making!!

Your hair looks very nice. Doesnt it give a great lift when you have a different color in it. I had mine done a little while ago too and felt so much happier with it. Good on your grandson too with his speech reading. I always used to feel so nervous doing those - thankfully my daughter doesnt when she has to do them.