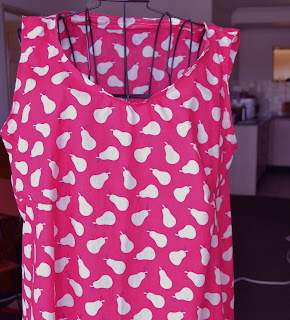 When I was at Birkenhead Point the other day, I bought three lots of material for some summer clothes. Nothing expensive, just something for shopping or around the house. I bought two patterns, first I've bought in many years. One had a selection of tops, the other had a top, jacket, dress, skirt and long trousers. I set out today to make a toile from one of the fabrics I bought. Just as well I did and hadn't cut into the better material I also bought. Look at the neckline and armholes. Yes, it needs a good press but that won't improve the structural problems. The pattern does not have proper facings given. They are just quite narrow strips cut on the bias. They cut into the piece of material I had after the main pieces and have made some awkward shapes there. By the time the bias strips are hemmed and sewn on, they are very narrow indeed. They need interfacing to avoid the sloppy line left around the neck. I'll trace off the pattern and make proper shaped facings next time. The armhole facings have the same problem as well. I also need to trim some fabric from the vertical section of the armhole and make the depth better too. As for the bust darts - they are almost parallel with the waist line.  No support at all for the model and I'm more generously endowed than she is. 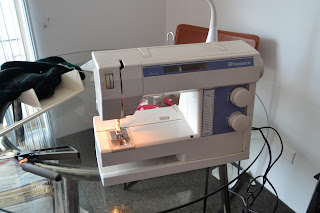 While at Birkenhead Point I looked at some sewing machines as I knew my Husqvarna was not working well. I was disappointed with the quality they had. Well known brands but they did not look well made. Knobs did not turn well and smoothly and the entire machine looked cheap and nasty. Now I have not used mine much in the last four years. A couple of pairs of lounge pants for me from Amy Butler book and some easy skirts for the little girls for Christmas a couple of years ago. Not much at all.  I was having problems with the stitch length changing and with the tension.  Now the tension on this Husqvarna is preset at the factory and should not need adjusting, but it was very poor.

However, today I took it out and had  a look.  M-H from Witty Knitter,emailed me with a recommendation for someone local to service it.  Thanks very much.  I've rung them and they do this brand.  It looked solid and well built and I know it should work well.  Lynne suggested trying a change of needle.  So I've done that and it seems at the moment to be working.  I will get it serviced as it was bought in 1994 and has never been touched.  It could probably use a good cleanout at least.  It was expensive then, $900, so I wouldn't want to pay today's equivalent.  So thanks too to Lynne.

I'll try adjusting  this before I cut out the better material. 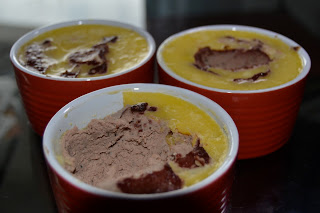 I don't eat a lot of meat and I never eat liver  by itself but decided I want to make some pate.  I bought 500 gm chicken livers and made several small pots.  The one in the foreground has been sampled and I've given away another couple of pots.

This one has half a cup of brandy blended into it and a goodly amount of tinned green peppercorns.      It tastes good, although I have only a small amount at any one time.  The recipe is easy.  The worst part is trimming the livers before cooking them lightly.  I wore the thin rubber gloves for that bit.
Posted by Jan at 10:24 pm

Oh, that's a poor pattern, not to have any facings. I hope your machine is up and running and hunky-dory soon.
Eww, liver, but I must admit that I have made pate like that to, and it is nice!!
That's pretty pear material and it is a shame the darts are in the wrong place, even for a model!!!

Glad changing the needle helped. A clean and a service will probably do wonders but it won't help that dress pattern!

I don't like offal(steak and kidney pie or casserole, lambs fry - erk!) but pate and some liverwursts I do like; strange, isn't it?