A good day yesterday.  Lynne met me at the station near her and very kindly took me to the place she has used for many years  for framing and blocking cross stitch.  The place near here which I have used before seems to have disappeared.  I was pleased to have a recommendation of the quality of their work and I  could see from their samples that care had been taken.

I had five woollen tapestries I discovered when I unpacked the stuff from  Mum.  They had been done by Dad.  I'm not sure how old they are.  He died just on thirteen years ago and had Alzheimer's for about the same length of time before that.  I decided I would have two blocked and framed to give my brother and sister  for Christmas. The woman in the shop was amazed they were in such good condition especially when we worked out how old they must be.  That would be my mother's storage and care.  She was meticulous about such things.

We spent quite a bit of time choosing colours for the mount and then a frame to suit.  Thanks, Lynne, I'm looking forward to seeing the finished article and I'm quite sure neither my brother nor sister will have any idea what's in their parcel. 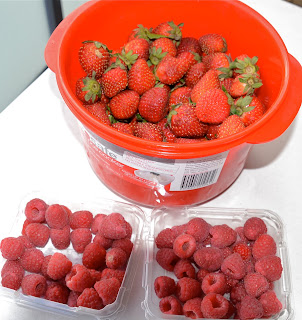 After I had finished we went for lunch and a chat.  Lynne and I have had email correspondence for quite a while now but have not met before.  We sat and talked about all sorts of things over lunch, particularly  our grandchildren.  Very pleasant.  Then she directed me back through the maze of the shopping centre towards the train station and we parted.  The centre is divided in two parts and while I vaguely knew one area, I was a bit lost.  A train came in as I came down the stairs so I had a good day as far as transport  was concerned too.

I walked past a large fruit market and saw these berries on sale quite cheaply.  I use frozen berries on my morning muesli but was happy to buy all these.  The raspberries were $2.90 a punnet where they are often double that and I don't buy them.  All the strawberries and some I ate yesterday as well, a kilo, cost $5 and I've inspected them carefully. All good.  They are a splash of colour on a fairly grey day here.

So thanks, Lynne.  It was a good day.

Edited to add:   Thanks for good wishes and concern about my son who was mugged. He's making progress but is still off work. His headache has eased most of the time, but if he touches the wound the skateboard axle made on his head, it returns immediately, very strongly. He is to have a scan to see if there is something the original x-ray missed. Doctor seems to think nothing will show up and it will just be time to heal. He's also had some counselling for the trauma.
Posted by Jan at 11:10 am

You're very welcome. I had a good time too. Can we do it again some time? Next time I'll come to you.

It is always lovely to meet imaginary internet friends!! What a lovely idea to give the tapestries as gifts!! Oh nice berries, and very cheap.
I hope all goes well for your son and his x-ray.