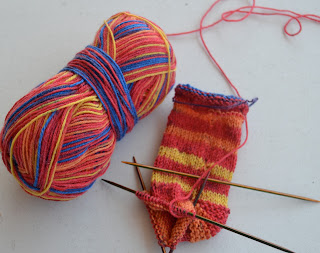 Lots of photos  today, but here's some  token knitting as my Catkin shawl is still in timeout.  A friend in Canada has an almost 2 year  old and will have another child in a couple of weeks.  Booties are already done for that one and I think I may have  a baby hat in the present basket.  I decided to make some socks for the older boy.  I'm right out of practice for such a size and my youngest grandchild was a big boy, so what I did for him was no help.  I've finally seen an up-to-date photo, so have a reasonable guess as to size.  The yarn is Heirloom Jigsaw, bought for socks when grandson's favourite colour was orange.  Thank goodness he now likes blue better.  Orange is hard on the eyes to knit and blue yarn is much easier to find. 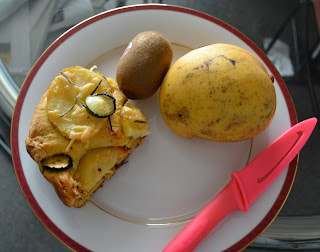 Here's lunch.  Vegetables are in the loaf and the fruit is on the plate.  I found the loaf  recipe and made it.  Next time I'll spread it into a bigger tin as it has made a very solid loaf.  This slice is at lest four centimetres thick.  There is mashed potato and zucchini in the loaf, although I used kumara.  Cheese, oil are also there. It took well over an hour to cook and is quite dense although the flavour is good.  Slices of pre-boiled potato, more cheese and zucchini are on the  top.  The mango and eight kiwifruit are part of my fruit and vegetable delivery so I've been enjoying a taste of spring at lunchtime all week.  And the Saturday newspaper spread untidily on a chair.  I can't quite crop it out. 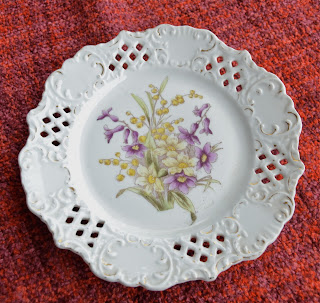 Now that I have my books about 90% sorted and most of the amazing mess from them cleaned up and over twenty boxes taken downstairs, I've started on the things my sister sent down from Mum.  Some I threw out.  I didn't recognise quite a bit of it and there was no monetary value in holey tea towels and similar.  I have a suspicion she could not make the decision herself so passed it on to me.  I thought I was OK about doing this unpacking,but in Burwood yesterday I bought a cup of coffee and then found myself eating a piece of very rich caramel slice.  Comfort food.  The old fashioned one made with real chocolate on top and the caramel  from condensed milk.

I have four of these beautiful plates.  My grandmother was born in 1897 and these plates were a  wedding present to her great, great grandmother.  I have no idea of that time but am guessing with those "greats" that it easily could be in the 1830s. The flowers are beautifully done.  There was also a set of lovely bread and butter plates which belonged to the Cox family who made the road over the Blue Mountains in 1813.  I think my brother got those.  There are no markings on any of the plates so I can't identify them as I have no expertise in that sort of thing at all. 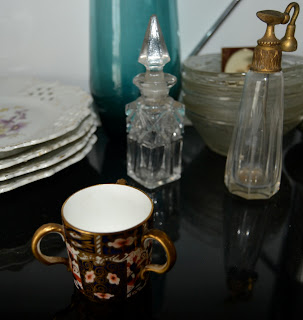 The two perfume bottles I've had for years and I'm emotionally attached to the small bowls.  I doubt they have much value but I associate them with a small house in the Blue Mountains and childhood holidays.

The three handled cup in the foreground is a different matter.  The colours are rich and sumptuous. When I tried  to research more into them a few years ago, I could find mentions of English auctions, but very little more.

There's more information around now and I found a picture of an identical cup.  It's made by Royal Crown Derby at their Omaston Road works.  These works are still in operation.  There's a clear marking on the cup and I found a page of dating marks  with a bit of searching.  This cup was made in 1911.

Unpacking and clearing up has taken quite a while and I still have stuff to sort.  I found my primary school reports.  I was a sickly child and regularly had much time off and time in hospital.  I remember being sick but was surprised to see that practically every year, I was absent for 12-14 weeks of school.  That was the equivalent of a term then.  There were three terms/year.  Still at the top of the class.  When I taught, classes were bigger than now.  Classes in my primary school however,  had between 46-48 pupils.  I noted that in third class, the comment on my English compositions was "original and entertaining."  I really wonder what I wrote!  Perhaps I found another conclusion to "we arrived home, tired but happy."  LOL
Posted by Jan at 3:35 pm

It must be nice to look through things from your past and remember certain memories. Your loaf sounds very filling but delicious!

Those floral plates are absolutely gorgeous. It's funny how things with no monetary value are priceless to us! Sounds like you've been having a lovely trip down memory lane!

PS Grandson's love of orange seems like only yesterday; how quickly time flies!