Just a very short entry tonight.  I've been out most of the day in the heat with several conflicting engagements.  As I was still awake early this morning, I'm tired and am going to bed early.

The Anglican  church I attend had a fete today.  There weren't many there when I arrived fairly early so I hope the number picked up later.  I bought a couple of second hand books, a Ruth Rendell pack for a son and a Jackie French story for one of my grandchildren. 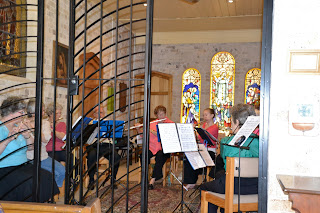 The inner-west parish originally had two churches in two suburbs but in the 1970s one was sold and there are now units on the site.  A small chapel with the same name was built in the main church and given the name of the smaller church and that is what is shown here.  I think the windows were from the original church.  We have much larger, very beautiful windows in the main church. The church itself, 1880s construction, is through the wooden door to the left.  The group here was playing for those having morning  tea in the hall next door.

We have a very old organ which has just been restored at great cost, it's unique in Australia.  Until recently we ran a programme for many in the area.  Lots of people with mental illness live around here.  The programme gave them an address for mail, very cheap food, access to doctors, free legal  advice from pro bono solicitors, and a safe place to meet.   An op shop is in the main street of Newtown and helps support such things.  There are many artists the largest population of those classing themselves as such in Australia apparently, lots of  Goths and a large number of Greens and environmentalists, not mention those who call themselves Anarchists. (Interesting to note that their book shop was well fortified with bars and chains on the windows and doors.  Apparently anarchy is ok, so long as it doesn't touch them.)
Posted by Jan at 8:43 pm

Older Grandson shared our bed for most of last night and had a bad night so I've been pretty tired too. Been shopping for clothes with DD, been to the Knitters' Guild (Blue Mtns group) meeting including AGM where DD became treasurer, and went (with WM and DD) to see an amateur performance of Pygmalion tonight! Just after midnight, must get to bed too! Hope you get a better night's sleep tonight although it's still pretty warm!

I love your anarchy comment!!! Hope you had a nice sleep and it was cooler. Sounds like a lovely fete with lots of bargains. Beautiful windows too.