Cindy challenged me to come up with the goods with the bananas after I left a comment about whizzing them up on her post about yoghurt icypoles.  So when I was fruitlessly searching local shops for icypole moulds, I remembered to buy bananas.  I wasn't at all sure how the experiment  would go because I like bananas barely off green in colour, just a tinge of gold on them and certainly no brown flecks at all. I'm told it works with riper bananas as well, but they are not for me at all.

I came home and sliced up two large bananas to freeze before I had even considered getting lunch.  Picture here shows them on baking paper after several hours in the freezer.  It's not a good picture, I need to do some research on avoiding the lens shape in close-ups.  I've had it happen before and I've cropped the photo here to avoid most of it. Still almost all the bits can be seen. 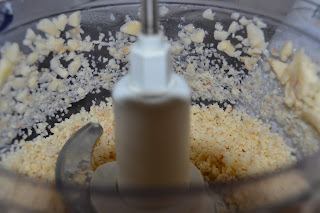 Into the food processor.  I used the bigger metal cutting blade.  The smaller plastic mixing blade seemed too small to mix properly.  I might give that a go another time.  I'd also try a stick mixer as I reckon doing it in a narrow diameter, deeper container would work well.

I was surprised when I stopped it first.  It almost resembled rubbing in crumbs for pastry.  I had been using the pulse control on the food processor.

I switched to a constant low speed and stopped several times to scrape everything down.  Then I upped the speed just a bit and added about a tablespoon of neat Buderim Ginger Refresher Cordial.  I saw where someone used  lemonade.  I don't drink such things so made do with the ginger as I thought those flavours would go well together. Having done this once, I think perhaps  any liquid would work. Cream might be really nice or rum if you are so inclined.  I'm not.  Even water would probably work. 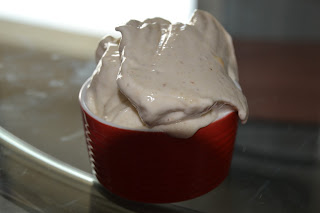 Then another few pulses and this is what I got.  Actually, this is less than I got.  There were several more spoonfuls which I ate straight from the food processor  bowl.

My lunch had been quite light, so this was afternoon tea.  I would have like a stronger ginger flavour so might try a bit of grated fresh ginger in it next time.  Some cinnamon on top would be nice and a dash of vanilla would be a pleasant change.

The texture was very pleasant, like a soft serve icecream but a bit thicker and heavier.  I wonder if the type of liquid, if any, which is added would change the texture. 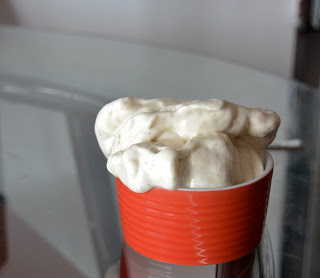 So there you are.  It works well and tastes good.  Icecream for anyone and especially  for those needing dairy or gluten free products.  Extra  fruit  too in day's rations.
Posted by Jan at 4:08 pm

Challenge accepted and completed. Wow, it looks fantastic. I can't believe it worked so well and tasted so good. That's definitely something I'll have to try soon. I like the idea of ginger, but I might add some frozen berries. Who knows????

Sounds like a recipe my WM would love - he eats bananas regularly and buys ginger cordial - he has even introduced it to Older Grandson (21 months today!) OG wasn't impressed with home made ginger beer last night though!