I can see clearly now...

...now the rain has gone. Or since I bought new specs.

I've had my old glasses since before I left my husband.  I think they were probably six or seven years old. I've been contemplating a new pair for a while as I could tell they were not doing as good as job as I needed. Last week, I was at local shopping centre and on an impulse went into a store to try on frames.  In about five minutes, I had chosen two pairs, one a back-up in case multifocals with different zones did not fit in the preferred style. 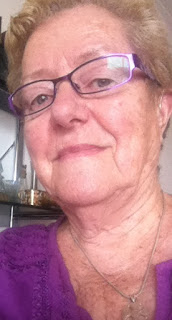 When I went to counter I was told they had a vacancy in twenty minutes for an examination, so I grabbed it. I had been looking for the store I knew and couldn't find it.  Apparently it was taken over and while this was SpecSavers, they still had on record my details from that time.  All I needed to do was update phone and address.

I was back in the same place this morning when a message came through on my phone that glasses had just been unpacked.  I was actually almost outside the shop.

I'm really happy with these new glasses.  The new script is brilliant and I can see how much I must have been missing for at least a year.  They are comfortable, although right now I'm getting used to the wider ear piece which I can sense outside my normal line of vision.  The other pair had a much narrower earpiece.  They have multifocal lenses which I have used for years.  Transition lenses, similarly used for many years.  Anti-glare coating which my last pair had.  Last pair, six r seven years ago cost over $900.These were around $550 with all the same features.

They totally update my image, particularly when new hair colour is taken into account.  I'm not fashion conscious very much at all but am pleased with the new frames.

I love that song!! Now I am humming along. You look lovely: very stylish glasses, very flattering and the colour matches your top. Did you do that on purpose or was it serendipity?? I get a new pair every year as it comes with my health insurance. That, and a visit to the dentist is all I really do.